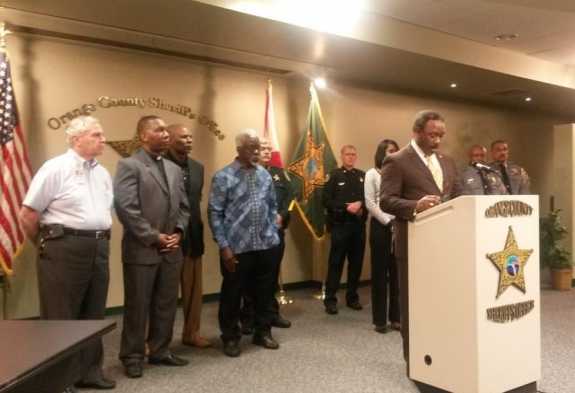 The Orange County Sheriff is working with community leaders to ease tension after the shooting of an unarmed black man by a deputy on Monday in West Orlando.

28-year-old Cedric Bartee was suspected of driving a stolen vehicle.

According to the sheriff’s office, Sergeant Robert McCarthy, a white officer, shot Bartee because he was not complying with commands and he feared for his safety.

But with speculation over whether Bartee had his hands up to surrender, Sheriff Jerry Demings says a fair investigation is important for everyone—including the public. Demings, has called for an investigation from the Florida Department of Law Enforcement. He says, “We’re not in a place to mete out street justice. We have a system that will determine whether they’re innocent or guilty. That process has to move forward and what we’re trying to ensure here is an abundance of transparency.”

The sheriff’s office is working with community leaders like Pastor Erroll Thompson of New Life Missionary Baptist Church to bridge a cap between police and the people they serve.

Twenty-eight-year-old Cedric Bartee is in critical condition, while Sergeant McCarthy has been placed on administrative leave.

Activists are planning a rally against police brutality tomorrow outside of the U.S. Department of Justice in Orlando.