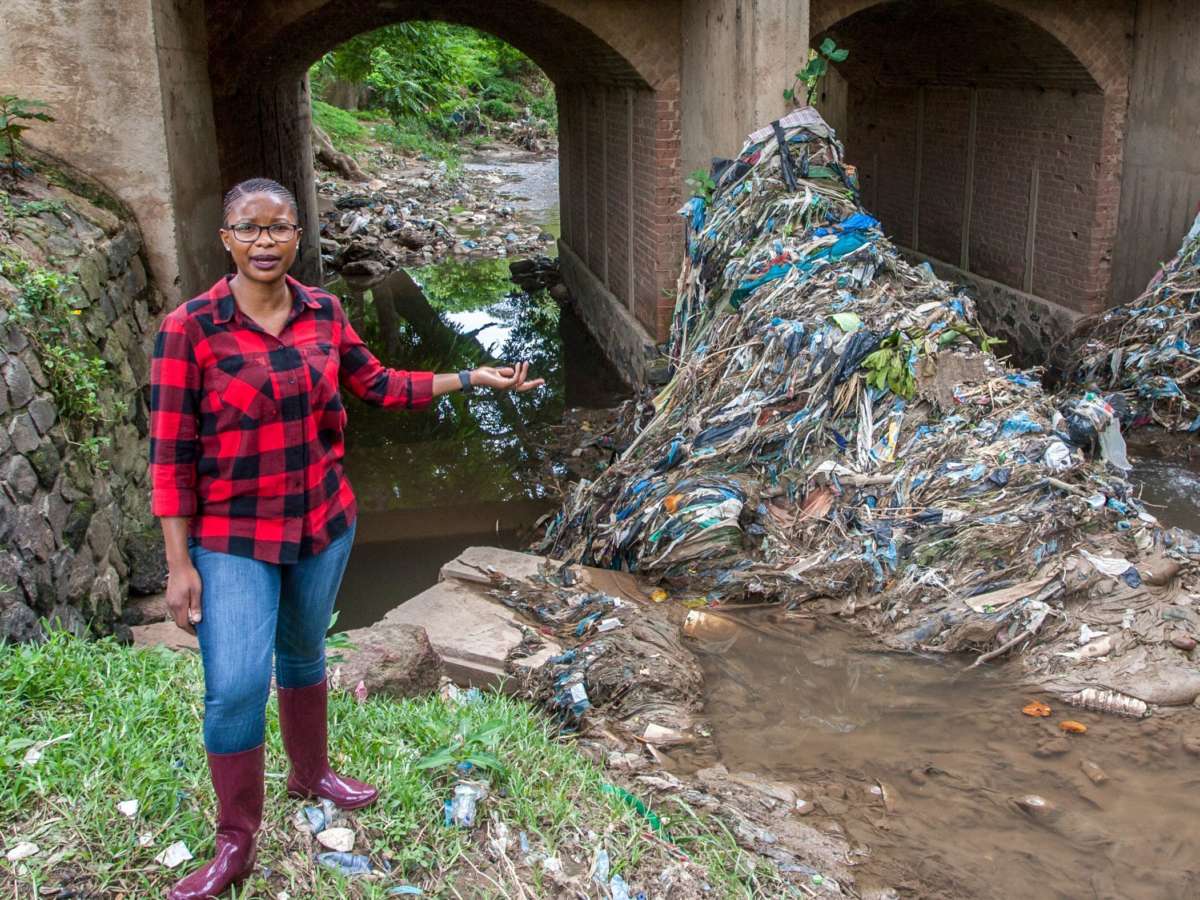 Gloria Majiga-Kamoto, an activist from Malawi, is one of six recipients of the 2021 Goldman Environmental Prize. Majiga-Kamoto has been instrumental in implementing Malawi's ban on thin plastics.

For Gloria Majiga-Kamoto, her great awakening to plastic pollution started with goats.

She was working for a local environmental nongovernmental organization in her native Malawi with a program that gave goats to rural farmers. The farmers would use the goats’ dung to produce low-cost, high-quality organic fertilizer.

The problem? The thin plastic bags covering the Malawian countryside.

“We have this very common street food. It’s called chiwaya, and it’s just really potato fried on the side of the road, and it’s served in these little blue plastics,” Majiga-Kamoto says. “So because it’s salty, once the goats get a taste of the salt, they just eat the plastic because they can’t really tell that it’s inedible. And they die because it blocks the ingestion system — there’s no way to survive.”

The goats were supposed to reproduce for the program, with the goat kids going on to new farmers. But because of plastic deaths, the whole goat chain started falling apart.

“It was a lot of expectation from the farmers waiting to benefit. So you had this farmer who had this one goat, and then they lost it. And that means that in that chain of farmers, that’s obviously affected quite a number of farmers who won’t get their turn.”

For Majiga-Kamoto, her experience at the NGO with the plastic-eating goats was the moment it all changed. All of a sudden, she started noticing how plastics were everywhere in the Malawian environment and food system — affecting people’s livelihoods and health.

“We’re choking in plastics,” Majiga-Kamoto says. “And so what it means is that in one way or the other, we as humans are consuming these plastics.”

Majiga-Kamoto was also seeing how plastics contributed to the growth of disease. Huge piles of plastic trash were blocking off Malawi’s many waterways, creating pungent breeding grounds for mosquitoes that carry malaria and for bacteria that cause cholera.

The 30-year-old says she remembers a time when Malawians didn’t rely so much on thin, single-use plastic. “I remember back in the day when we’d go to the market and buy things like fish, like dried fish, you’d get it in newspapers.”

But thin plastics took off in the last decade or so as new manufacturers sprung up in Malawi, selling products like thin plastic bags at cheap prices that made them affordable and accessible even in the most undeveloped parts of the country. A 2019 report funded by the U.N. Development Programme found that Malawi produces an estimated 75,000 metric tons of plastic a year, with 80% reportedly single-use plastic. Single-use plastic refers to bags, straws and bottles that can’t be recycled, and thin plastic refers to plastic that’s under 60 microns in thickness.

The proliferation of this thin-plastic waste led to the Malawian government’s 2015 decision to ban the production, distribution and importation of single-use thin plastic. But before the ban could go into full effect, Malawi’s plastics-manufacturing industry filed an injunction at the country’s High Court. The ban stalled.

When Majiga-Kamoto and a group of her fellow environmental-NGO workers and activists heard about the injunction, they were angry and frustrated. “It sort of caught our interest to say, ‘Wait a minute. You mean that there’s actually people in our society who think that this is not a problem and that we should actually continue to live this way?’ ”

Galvanized, Majiga-Kamoto led a group of local environmental activists and NGOs to actually get the single-use thin-plastics ban implemented, organizing marches on the judiciary where the decision would be decided. She kept her job at the NGO, the Centre for Environmental Policy and Advocacy, and did this work on her own time.

She rejected the plastic industry’s argument that the ban would hurt Malawi’s economy — and even debated an industry lobbyist on TV.

Finally in 2019, after multiple injunctions filed by the plastics industry, the High Court ruled in favor of the single-use thin-plastics ban. The following year, the Malawian government began closing down illegal plastic manufacturers.

Last week, Majiga-Kamoto was named one of the six winners of the 2021 Goldman Environmental Prize for her work on this issue. Michael Sutton, executive director of the Goldman Environmental Foundation, says Majiga-Kamoto’s fight with the plastics lobby epitomizes the spirit of the prize. “She mustered the troops, the grassroots communities, to take on the government and big industry and won several times,” Sutton says. “She not only won the ban in law but is now holding the government’s feet to the fire to enforce it.”

And Majiga-Kamoto isn’t letting up her pressure to uphold the single-use thin-plastics ban anytime soon, although she is trying to get some summer vacation time with her family — that is, if she isn’t interrupted.

“I was just at the lake a couple of weeks ago, and we were there just enjoying the beautiful lake, and along come these pieces of plastic.” Three plastic bags floated up closer to her, her son and her niece as they played in the water.

Majiga-Kamoto grabbed for the bags.

“My family was laughing to say, ‘You shouldn’t be working! You’re at the lake!’ And I’m like, ‘But I can’t just leave them in there!’ ”

Julia Simon is a regular contributor to NPR’s podcasts and news desks, focusing on climate change, energy and business news.