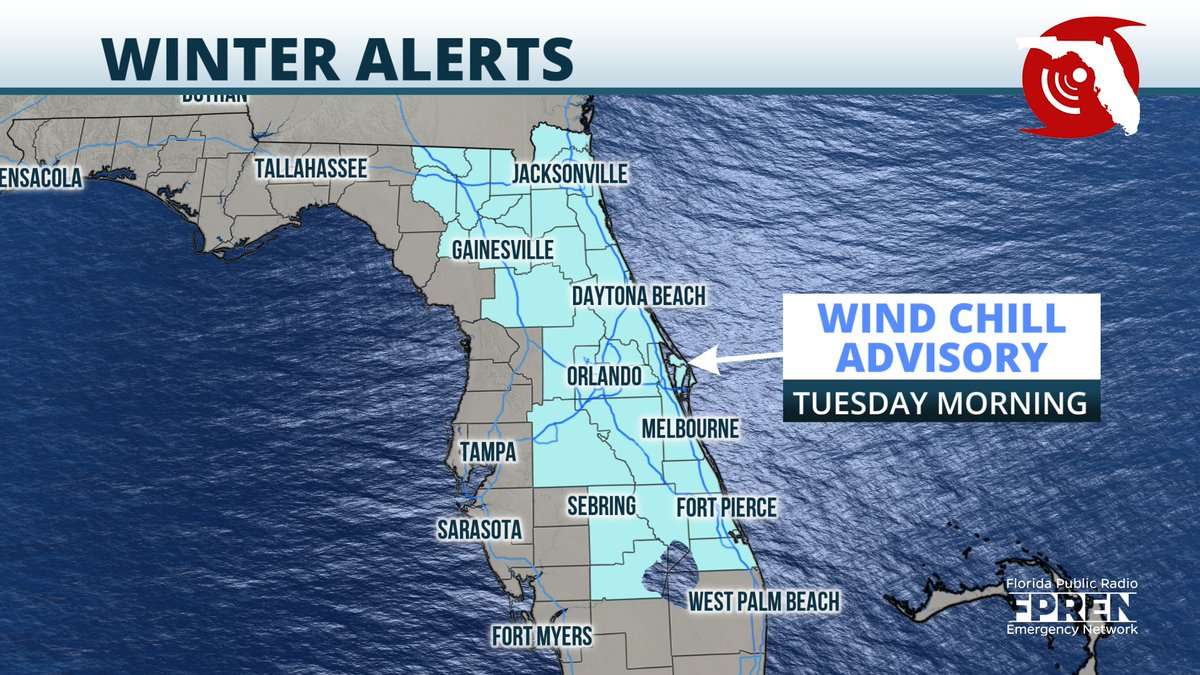 The National Weather Service in Melbourne issued Wind Chill Advisories for the Orlando metropolitan area, the Space Coast, and Treasure coast starting at 1 AM Tuesday.

They said winds of 10 to 20 mph will create a wind chill between 28 and 33 degrees early Tuesday morning, which may cause cold weather shelters to open. The Weather Service in Tampa also issued Wind Chill Advisories for Highlands and Polk counties for similarly low wind chills.

The gusty winds are responsible for rough surf and high rip current potential along many Florida beaches. The difference in air pressure — called a pressure gradient — between a strong storm near the Jersey Shore and high pressure over Texas is causing the strong winds. This pressure gradient is expected to continue Tuesday and a portion of Wednesday before finally relaxing Wednesday evening.

Highs in the 50s are likely Tuesday over Central and North Florida and in the 60s over South Florida. If the forecasts are correct, these temperatures would be 10 to 20 degrees below their seasonal averages. Temperatures will moderate on Wednesday afternoon and are expected to return to near average Thursday and Friday afternoons.

The cold start to February may remind some Floridians of the abnormal chill over Christmas, where many locations across the state had temperatures that were some 20 degrees below normal. Preliminary climate data for the month of January showed nearly the entire state experienced temperatures between average and about 1 degree above average. This is a far cry from the past two winters, when the mercury was consistently well above average.