Sex Ed After 50: Florida Seniors At Risk For HIV 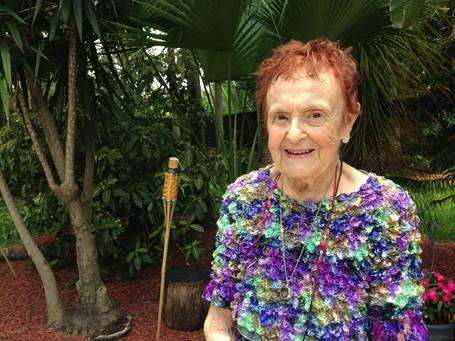 Kate GeMeiner, 85, is known as Dr. Truth, the Condom Lady.

If you’re talking about older people and sex, you have to talk to Kate GeMeiner. “I’m also known as Doctor Truth, the Condom Lady,” the 85-year-old said.

GeMeiner lives in Broward County, and spends a lot of her time at senior centers, nursing homes and assisted living facilities.

“And I ask the seniors: How old do you think you are when you stop thinking about sex? And they all say, when you’re dead,” she says with a laugh. “Or they’ll say things like when the casket is closed or something like that.”

Her joke’s not far from the truth. A 2013 New England Journal of Medicine study on sex and seniors found more than half of people ages 64 to 75 reported having sex in the previous year.

“I have people on the staffs at the different kinds of facilities, and they say, that doesn’t happen here,” GeMeiner said. “And I tell them, well, take a walk around the hallways around 10 or 11 o’clock tonight and see what’s happening.’’

There’s a consequence for that sexual activity. Older people, like anyone who’s having unprotected sex, are at risk of getting sexually transmitted infections, and HIV. In 2013, when Florida led the nation in the number of new HIV cases, nearly a quarter of those diagnosed were age 50 and older.

That adds to an already sobering statistic. In Florida, 44 percent of all people living with HIV have reached their 50th birthday. That’s slightly more than the national average.

GeMeiner, who has been talking sex ed to the older crowd in South Florida for two decades, said the numbers might be even higher.

“A lot of the seniors aren’t getting tested,” she said.

When those tests are done, and the results show that a person is HIV-positive, county health department are often the first place the infected person meets.

At the Hillsborough County health Department Jennifer Vieira is assigned to track down patients who have been newly diagnosed with HIV.

“It used to be before just finding and notifying and finding partners, but we’re really, really moving to linkage to care,” she said.

One of the patients she recently tried to find had recently moved to Tampa.

He’s in his 60s. Vieira can’t talk about HIV over the phone, but in her car, she tries calling ahead to see if he’s home.

“I just had to talk to him for a few minutes, is it ok if I stop by,” she asks a woman on the other end of the line.

“Now, look at me, I look like (I don’t have) HIV, but I got HIV…You know,” said the man who the health department asked not be identified.

The man said he’s been living with HIV for more than 20 years.

Back in the car, Vieira said she will call the patient’s doctor, to follow-up and make sure he’s getting the right care. She says that after meeting the man, she’s confident he is managing his HIV infection and has it well under control.

“And now he’s battling things that a lot of people in their 60s are battling: high cholesterol, diabetes, arthritis,” she said. “So he can almost live a semi normal life.”

According to the U.S. Centers for Disease Control and Prevention, about three-quarters of older Americans are dealing with those types of chronic health conditions.

It’s another point that Kate GeMeiner – South Florida’s Condom Lady – uses to get through to her audience.

“I tell people at my presentations, you might not be able to prevent diabetes, heart trouble, cancer, etcetera, but you can prevent HIV and other STIs,” she said.

GeMeiner emphasizes that abstinence is the only way to be completely protected. But as her nickname implies, she urges people to use condoms.

“It’s important to negotiate in a neutral, non-sexual situation,” she said. “Don’t wait until you’re hot to trot to negotiate.”

GeMeiner said many seniors resist using condoms because they’re not worried about pregnancy. Or they don’t think they can get anything. But it is happening, she said.

“They have the thought just like teenagers do – it can’t happen to me,” GeMeiner said.

Lottie Watts is a reporter at WUSF in Tampa.