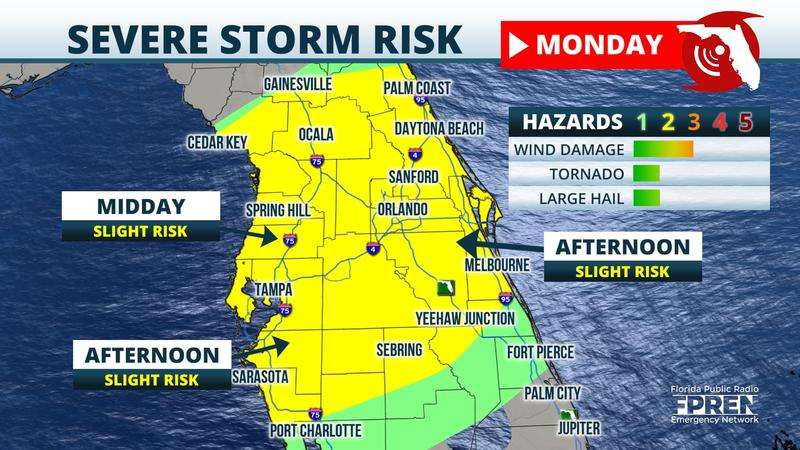 A broken line of thunderstorms will be sweeping across Central Florida Monday, and some of the cells could produce damaging wind gusts up to 60 mph and frequent cloud-to-ground lightning. An isolated tornado or hail is also possible from the strongest storms, although those risks appear low at this time.

As of 9 am Monday morning, the strongest storms were located near a line from Palatka to Ocala to Citrus Springs. Radar data at the time strongly suggested damaging winds and frequent cloud-to-ground lightning was occurring with the cells in western Marion and southeastern Levy counties.

Strongest storm activity this morning has been moving through #Levy and #Marion counties, where wind damage and dangerous cloud-to-ground lightning continue to be the primary hazards. #flwx pic.twitter.com/rbmZ0IKvAS

A Severe T-Storm Watch was issued around daybreak Monday morning for all of Central Florida. The watch includes the cities of Tampa, St. Petersburg, Lakeland, Ocala, Orlando, Daytona Beach, Sarasota and Melbourne until 3 pm EDT.

Forecast data and model simulations of future radar were in agreement that the line of strong storms would progress southeast toward the I-4 corridor by midday, then begin weakening as it moved toward Southwest Florida and the Treasure Coast Monday evening. Strong upper-level winds have been the primary driver of the potential severe weather, which have developed ahead of an approaching cold front from the northwest. These winds could make their way to the surface at times when the heaviest rain is falling. Dangerous cloud-to-ground lightning is also possible with the stronger storms.

The storm system and its attending severe weather risk is expected to weaken Monday evening over South Florida, leaving in its wake a much drier and quieter period of weather Tuesday and Wednesday.