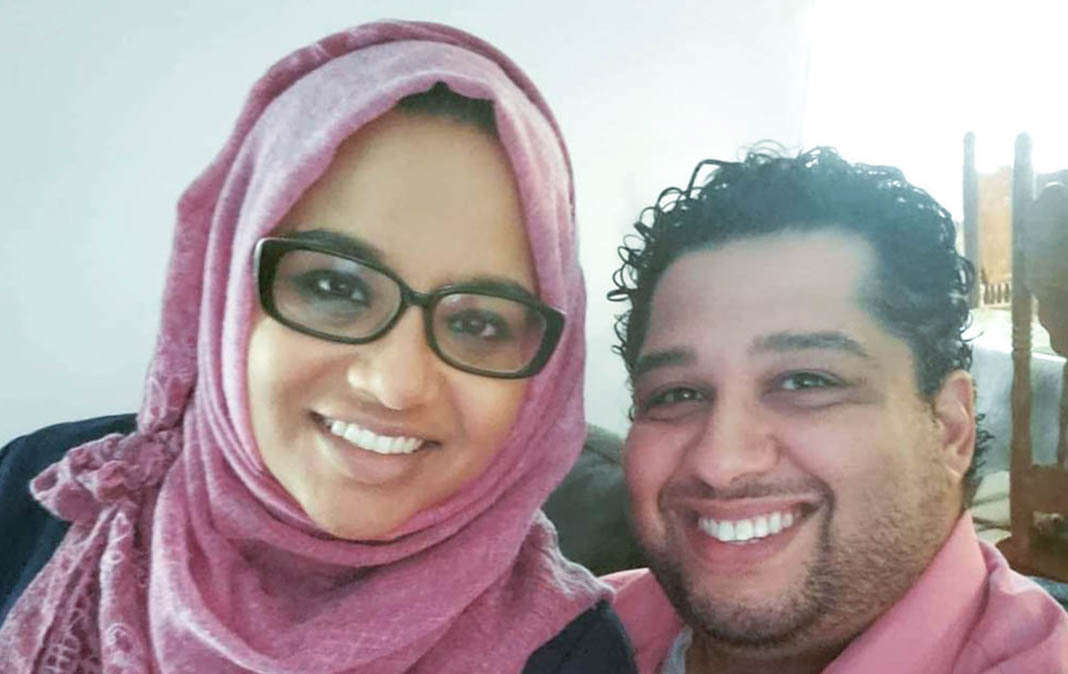 When Omar Anani first met his wife, Namira Islam Anani, he was instantly smitten. But for Namira, it took a literal wake-up call to realize that he was the one.

In a StoryCorps conversation last month, Omar, 39, and Namira, 33, shared their love story from Detroit, where he works as a restaurant owner and chef and she’s a nonprofit lawyer.

After meeting on a dating app, the couple went on their first date in August 2019.

A week later, Namira asked Omar for a favor.

“I had asked you to wake me up early, and then you did,” Namira said.

She expected his phone call, but she didn’t expect Omar to show up in person. Not long after they hung up, Namira was surprised by a knock on the door.

“I look through the little peephole, and I’m like, ‘Wait a second — is that Omar?’ And I also was thinking, ‘I don’t have any makeup on, like he hasn’t seen me without makeup on,’ and then I had to grab my scarf,” she recalled. “Then, when I opened the door, you just handed me this cup of coffee and left. Just to make me happy and put a smile on my face.”

“And I think that was the moment it just settled: This is the guy that I’m in love with and I’m gonna marry.”

They married that November.

“I knew right away,” Omar told his wife, “whereas you took some time to warm up to the idea.”

But not too long.

“It was three weeks, right?” Namira said, laughing. “Within three weeks we agreed to get married.”

In March, the newlyweds were dealt a health scare when Namira contracted COVID-19.

Namira quarantined for more than a month while she suffered serious symptoms.

“We were separated for six weeks because I would never be able to forgive myself if something happened to you and you caught it,” she said.

For the first few days, she struggled with breathing.

“You were calling, and then sometimes I couldn’t pick up and then when I could pick up, every two words I was having to stop to take a breath,” she said.

Namira asked her husband what that time was like for him.

“Back then, COVID was still new and I think my ignorance allowed me to not think those dark thoughts,” Omar said. Since then, he said, he has had multiple friends die from the coronavirus.

“It’s very hard, especially when you’re the person that likes to fix things, right?” he said. “And there’s no ‘fix-it’ when it comes to that.”

When Namira was sick, he would leave her food on the doorstep. One day, they had a socially distanced meal.

“I sat in the driveway in my truck and you sat in the bay window of the living room,” he said. “We kind of just sat there and ate dinner and talked to each other.”

It was a special moment, Namira remembered.

“It was one of those moments where it really cemented to me how important our relationship was and how much joy it brought into my life. I’m like, I want this level of happiness, and I want this joy,” she said.

“Just like how I knew right away that you were the right person to spend the rest of my life with, I know and have faith that no matter how tough things get, they’re gonna be OK,” Omar told her.

Audio produced for Morning Edition by Janmaris Perez. NPR’s Emma Bowman adapted it for the Web.