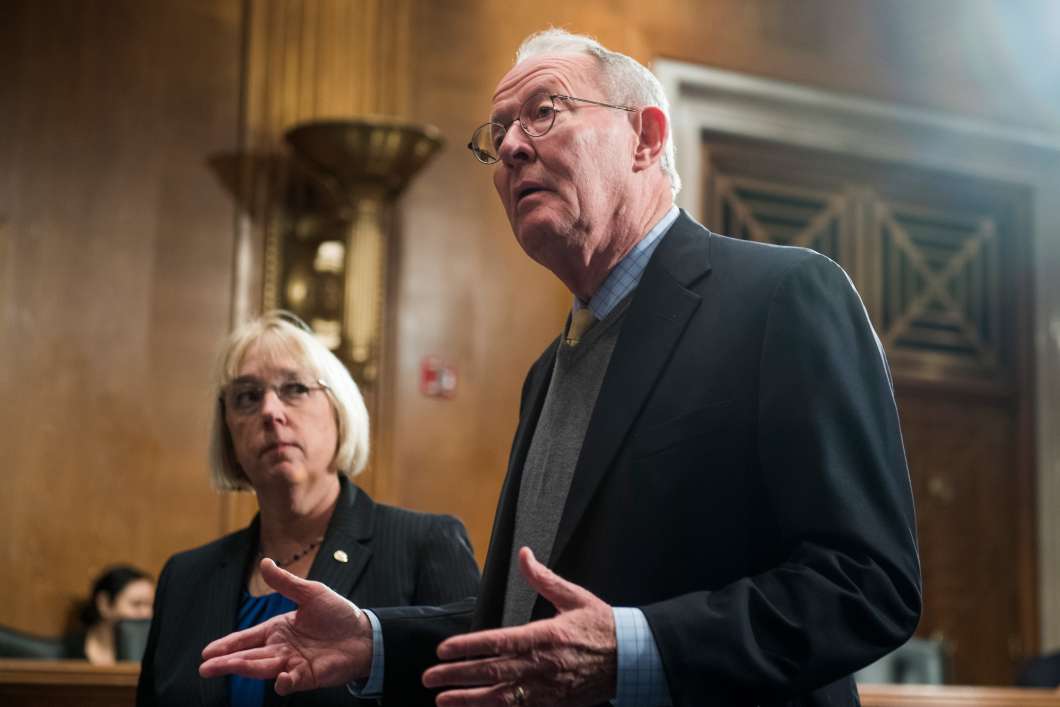 Sens. Patty Murray, D-Wash., and Lamar Alexander, R-Tenn., say they have a tentative agreement to appropriate the subsidies for the next two years, restore money used to encourage people to sign up for Affordable Care Act health plans, and make it easier for states to design their own alternative health care systems.
Image credit: Tom Williams

Less than a week after President Trump said he is cutting off subsidies to health insurance companies, lawmakers say they have a deal to restore the money and take other actions that could stabilize insurance markets for next year.

Sens. Lamar Alexander, R-Tenn., and Patty Murray, D-Wash., say they have a tentative agreement to appropriate the subsidies for the next two years, restore money used to encourage people to sign up for Affordable Care Act health plans, and make it easier for states to design their own alternative health care systems.

Alexander said the idea is to stabilize the markets in the short term while Congress continues to debate long-term changes to the ACA.

“Over the next two years, I think Americans won’t have to worry about the possibility of being able to buy insurance in the counties where they live,” he said in a conversation with reporters at the Capitol on Tuesday.

He said he spoke with President Trump over the weekend and that Trump said he supports the idea. However, Senate Majority Leader Mitch McConnell, R-Ky., would not commit to bringing the bill up for a vote, as Murray and Alexander seek enough support to ensure it could pass. The bill would need 60 votes to get across the finish line and would require at least a dozen Republicans to take a difficult political step in voting to shore up parts of Obamacare.

In a speech to the Heritage Foundation on tax changes on Tuesday evening, Trump mentioned the tentative deal.

“And I’m pleased the Democrats have finally responded to my call for them to take responsibility for their Obamacare disaster and work with Republicans to provide much-needed relief to the American people.  While I commend the bipartisan work done by Senators Alexander and Murray — and I do commend it — I continue to believe Congress must find a solution to the Obamacare mess instead of providing bailouts to insurance companies.”

“It’s a short-term solution,” Trump said in response to a question about the deal. “The solution will be for about a year or two years and it will get us over this intermediate hump.”

The deal comes just days after the president said he is cutting off reimbursements to insurance companies for discounts they are required by law to give to low-income customers to reduce the burden of copayments and deductibles. They’re known as “cost-sharing reduction” payments.

The deal reached Tuesday, if it becomes law, would restore those payments for at least the next two years.

The agreement, which Murray says has not yet been finalized, would also make it easier for states to get waivers so they can set up alternative health insurance systems and offer a wider variety of insurance policies.

Alexander said those plans would retain the minimum coverage requirements under the ACA but could vary the definition of what is affordable. The deal also allows more people to buy so-called catastrophic plans that cover major illness but pay for less routine care.

“This is a small step,” Alexander said. “I’d like to undersell it rather than oversell it.”

An analysis by Charles Gaba, who runs a website, ACASignups.net, that tracks enrollment and costs of ACA insurance, showed that premiums are set to rise an average of 30 percent next year, with premiums in some states, including Iowa, rising much more.

As premiums rise, consumers who don’t think they need much health care are less likely to buy coverage, leaving sicker people in the market. Because those sicker customers spend a lot of money on care, they drive premiums up even higher. With restoration of the cost-sharing subsidies, those premium increases could be far smaller.

For much of this year, Trump had been threatening to cut off the subsidies. So insurance companies in many states filed paperwork to sell policies on the ACA exchanges next year that included two sets of premiums — one if the cost-sharing payments continued, and another if they were cut off. The deadline to finalize those prices was in late September, however, and it’s not clear companies will be allowed to cut their prices if the Alexander-Murray deal becomes law.

The agreement would also restore $106 million in money to publicize the open enrollment period for ACA health insurance. Trump had cut the budget for ACA outreach by 90 percent earlier this year, a move many advocates said would suppress enrollment.

Lori Lodes, who ran ACA outreach during the Obama administration, said that money will only be effective if it is approved early enough to reach those who need coverage. Open enrollment on the federal exchange begins on Nov. 1 and ends on Dec. 15.

Murray said she and Alexander had had discussions with more than half the Senate about the bill and she believed the plan would get broad support. Alexander said they’ll work to get co-sponsors for the legislation throughout the week so they can bring a bill to McConnell for consideration. McConnell has not said whether he supports the effort.