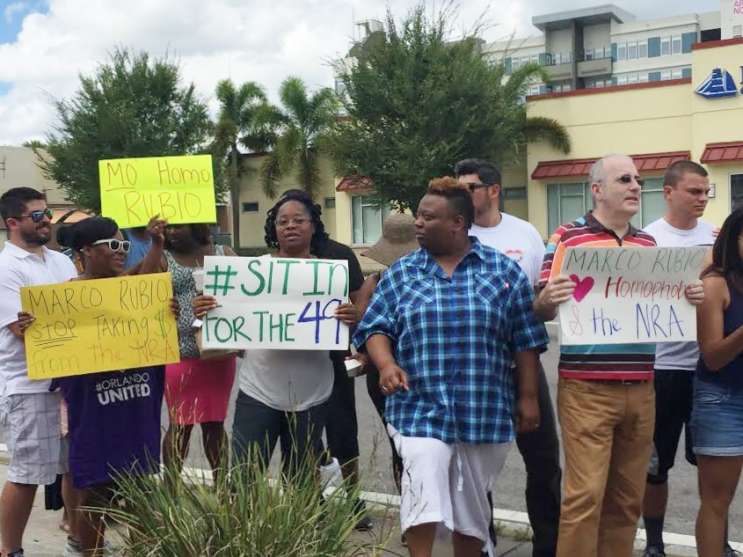 “One, two, three, four, we won’t take it anymore! Five six, seven, eight, Rubio, stop the hate!” shouted nearly two dozen protesters outside a furniture store where Senator Marco Rubio sat with staffers preparing for a press conference. The senator was in Orlando Tuesday as part of a multi-city campaign. He called the Orlando visit, just blocks from Pulse nightclub, an important stop and a chance to advocate for small business affected by the shooting that left 49 dead and more than fifty injured.

But protesters called the visit opportunistic, criticizing the senator for his alleged ties to the National Rifle Association and anti-LGBT groups. They urged Rubio to back legislation that would make it harder to get guns.

“First Amendment protects their right to be here and I respect that very much and they make points that we should be listening to. I just honestly don’t believe that whatever they’re screaming for would prevent this attack from happening,” said Rubio during a press conference inside the furniture store.

David Moran made it into that press conference, posing as a print journalist. Morgan lost two friends in the Pulse shooting and was arrested last week during a sit-in and Rubio’s office. He confronted Rubio, asking him why he had ties to gun advocates and anti-LGBT groups.

“Quite frankly, I respect all people,” Rubio responded. “We have a disagreement probably on the definition of marriage.”

“Your policies kill people. You have to protect us. You’re not protecting us. We’re going to be killed….Sir, you have blood on your hands,” Morgan interjected.

“Well, that’s an unfair thing for you to say,” Rubio replied. “What happened in Pulse was a terrorist attack.”

Rubio backed a proposal that would keep guns out of the hands of potential terrorists. He says he is not attending the Republican National Convention in Cleveland this week to campaign across the state.