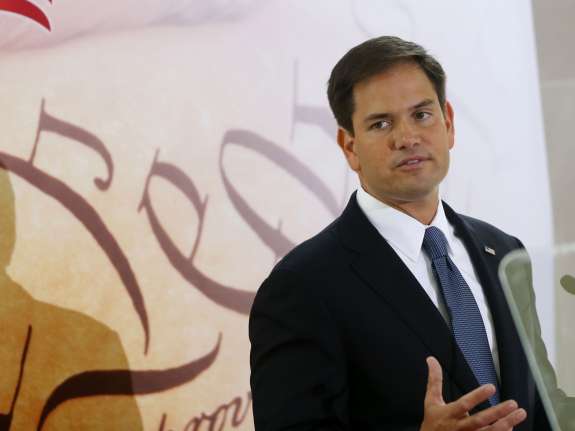 Protesters gathered outside a sold out fundraiser in Altamonte Springs Tuesday night waving signs that read “Stop hiding,” and “Hold a town hall.” They hoped to make a statement for Senator Marco Rubio, who was delivering the keynote address at the Seminole County Republicans Lincoln Day dinner.

Ticket prices for the sold-out fundraiser started at $150 and went up to $3,000 for a special reception and a seat at the VIP table.

“The only time we’ve even had a chance to see him is if we want to spend $3000 to go have a conversation and, you know, we’re his constituents,” said Mitch Emerson.

During a special VIP reception, Rubio came face to face with Alison Holmes and her son J.J., who has cerebral palsy and is concerned the latest health care overhaul could dramatically shift his access to medication. Holmes, who paid $600 to attend the event, asked Rubio why he would not hold a town hall to hear from constituents.

“This conversation we’re having right now would’ve been impossible at the town hall, unfortunately […] There would’ve been fifty or sixty people there whose only job would’ve been to scream at everything I said—interrupt so they show off for cameras—and then we could never have this conversation. I would love to be able to have a town hall like this, but that’s not the way they work anymore,” he responded.

During his keynote address, he urged voters to consider healthy debate and to embrace grassroots campaigning. Rubio, a one-time presidential candidate, said the only way to ensure that President Trump has four more years in the White House is to keep spreading the Republican message of an America that is unified.

“This nation has always had great challenges, but each generation of Americans has confronted them and they solved them. Now, guess what? Now it’s our turn to do the same thing and this party must lead the way in doing that,” he added.

The appearance was eclipsed inside the event, when a woman interrupted Rubio’s speech to ask him about his stance on energy policy. She was later escorted out of the banquet hall.

The event was Rubio’s first reported visit to central Florida since March, when he joined Governor Rick Scott, President Donald Trump, and Education Secretary DeVos in Orlando for a tour to promote school choice. This was his second Lincoln Day event this year. The first annual dinner for Republican donors he keynoted was in Pinellas County.

Organizers of the event said Rubio’s appearance was key given his presence on the national political scene.