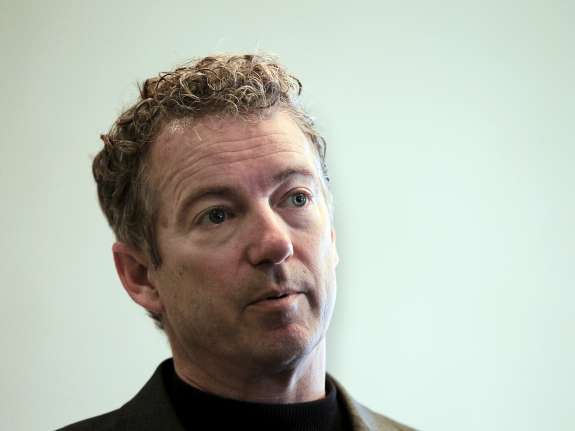 “I am running for president to return our country to the principles of liberty and limited government,” he said in a statement on his website.

The announcement comes ahead of a scheduled speech today at 11:30 a..m.

Paul also released a video with the opening line: “On April 7, a different kind of Republican will take on Washington.”

We’ll update this post with news from Paul’s speech.

Paul faces what is likely to be a crowded Republican field for 2016. Although Sen. Ted Cruz of Texas, his colleague in the Senate, is the only other Republican to have announced his intention to run for president, Sen. Marco Rubio of Florida, Govs. Chris Christie of New Jersey and Scott Walker of Wisconsin, as well as former Florida Gov. Jeb Bush, are expected to join the fray.

Polls show Paul in a three-way tie for third place in the 2016 Republican presidential nomination. Bush and Walker lead the most recent average of polls.

Paul, the son of longtime libertarian Republican Rep. Ron Paul of Texas, was elected to the U.S. Senate in 2010 in the Tea Party wave. An ophthalmologist by training, Paul is pitching himself as a “different kind of Republican.” When he was first elected, he was seen as candidate whose libertarian ideas, in the words of The Washington Post, “could make him the most unusual and intriguing voice among the major contenders in the 2016 field.

“But now, as he prepares to make his formal announcement Tuesday, Paul is a candidate who has turned fuzzy, having trimmed his positions and rhetoric so much that it’s unclear what kind of Republican he will present himself as when he takes the stage.”

As he prepared to announce his presidential ambitions, Paul adopted a more muscular defense policy and reached out to religious conservatives (For more on the former, you can listen to Paul’s interview with NPR’s Robert Siegel last September). Nick Gillespie, editor in chief of Reason.com and Reason TV, told NPR’s Scott Simon in a recent interview that Paul could be called “libertarian-ish.”

“You know, I think he is talking what he believes,” he said. “But I think he draws a lot of ideas from his father generally without some of the baggage, to be honest.

“And people are more interested I think now than even a few years ago of being allowed to make more choices that are important in their lives. And you see that reflected in things like the growth in pot legalization and gay marriage. Then at the same time they’re very skeptical of government, whether it’s a conservative Republican government under Bush or a liberal democratic government under Obama.”

You can follow more detailed coverage of this story on our It’s All Politics blog here.