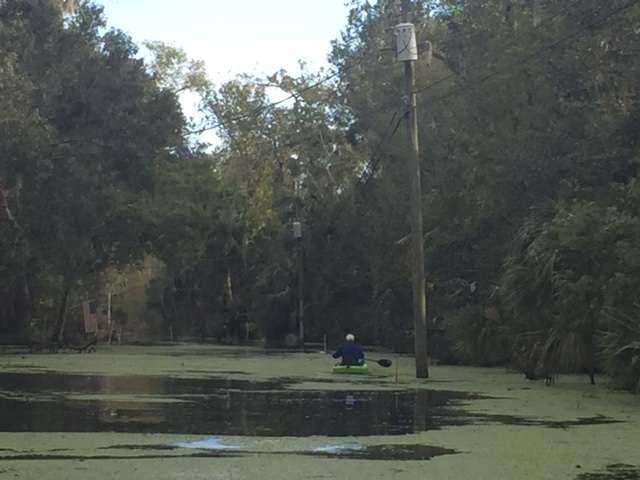 For most central Florida residents, day to day life has gone back to normal since Hurricane Irma. That’s not the case for residents along Lake Harney in Seminole County.

Mike Ertel jumps into his black truck and heads home after a day at work as Seminole County’s supervisor of elections. Commuting used to be mundane, but now it’s an adventure.

“We always had alligators in the lake, but it’s a common occurrence now for the gators to be in the street,” said Ertel.

That’s because the street is more like a river. Ertel lives on Lake Harney. The St. Johns River flows into the lake, and the lake now flows into his street.

Driving slowly Ertel keeps an eye on where the road should be. The line of mailboxes peeking out just above the water line help. If he opens the door of his truck the water almost reaches inside.

Neighbors without a truck have found other ways to commute.

As Irma approached Florida, Ertel had only a hint of what would happen. “The folks who had been here a while said ‘hey be prepared for a few weeks after each hurricane of having the road flooded.’ And we were like, oh, okay.”

But it was never this bad.

Edging closer to home, he keeps an eye out for snakes and random debris.

“This has become the new norm, and now we’re just trying to figure out how long the new norm is going to last,” he said.

Halfway up his driveway the water recedes. The flooding has turned his house and a relatively small patch of dry land into an island. His wife Michelle says right after the hurricane everything seemed fine.

“It was very slowly like it would just come up the driveway a little bit at a time,” she said. “But eventually we woke up in the morning and it was as up as far as you can see it here.”

The inside of their house is dry even though waves from the lake pound relentlessly at the foundation of their garage.

“I’ve been re placing the sandbags to defend against where the waves are going that day,” said Mike Ertel. “They were running all along here and in front of the garage for the hurricane. And now it’s being repurposed for flood defense.”

Rising water lifted their fiberglass pool and buckled the back deck. And their pontoon boat crashed on top of their other, smaller boat. That’s pretty much the extent of the damage.

There are times when navigating the immovable water gets frustrating. Being trapped by the water has taken a psychological toll, but the Ertels are learning to Zen with Mother Nature.

“It’s been a pain, but it’s okay. I look at people in Barbuda who will not have anything back,” said Michelle Ertel. “We have our house, we have power, we have each other, it really is okay.”

So she’s dealing with it. Stuck at home she does most of her work online and putters around cleaning out drawers and closets.

Some neighbors have moved. The Ertels are staying put. Waiting for Lake Harney to fully recede, and that may not happen until New Years.