See Where There’s A Rabies Alert in Brevard County 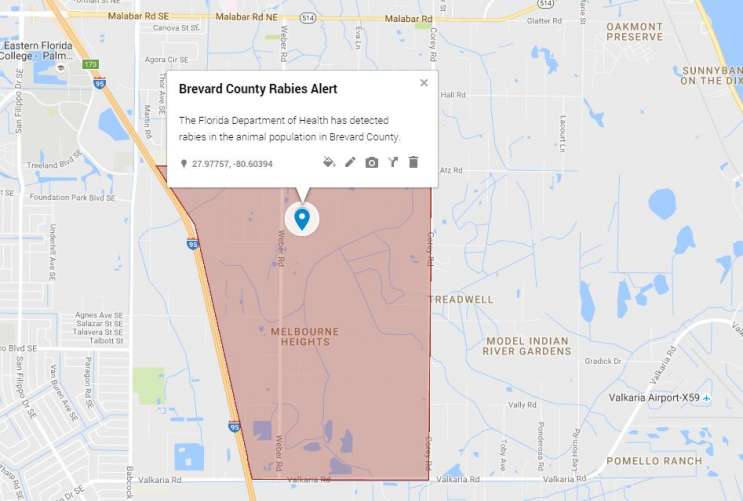 The Florida Department of Health has issued a rabies alert in Brevard County.

The Florida Department of Health has issued a rabies alert in Brevard County.

Wild animals have tested positive for rabies in the Weber Road area of south Brevard County. Officials said that means domesticated animals can be at risk for contracting the virus if they aren’t vaccinated.

“All wildlife contact should be avoided, particularly raccoons, bats, foxes, skunks, otters, bobcats and coyotes,” the health department wrote in a statement.

Helen Medlin, who oversees the rabies program for the Brevard County Department of Health, said most exposures in Florida come from raccoons.

“The people we’ve treated who have been bitten by raccoons, often those raccoons normalize to humans because humans have been feeding them and they’re looking for food from humans,” Medlin said.

There have been 37 cases of rabies detected in wild animals so far in Florida this year, with most being found in raccoons. Check here for the map of Florida rabies cases for 2016.

According to the U.S. Centers for Disease Control and Prevention, rabies is a potentially fatal virus infecting the brain. The early symptoms of rabies in people include fever, headache and general weakness or discomfort.

As the disease progresses, “more specific symptoms appear and may include insomnia, anxiety, confusion, slight or partial paralysis, excitation, hallucinations, agitation, hypersalivation (increase in saliva), difficulty swallowing, and hydrophobia (fear of water),” the CDC writes.  “Death usually occurs within days of the onset of these symptoms.”

The Brevard County alert is from I-95 on the west to Corey Road to the east, and from ATZ road to the north to Valkaria Road to the south.
See below for a map.