Secretary of State Mike Pompeo, Talks Trump Administration’s Domestic and Foreign Policies to a Room of Supporters in Bushnell 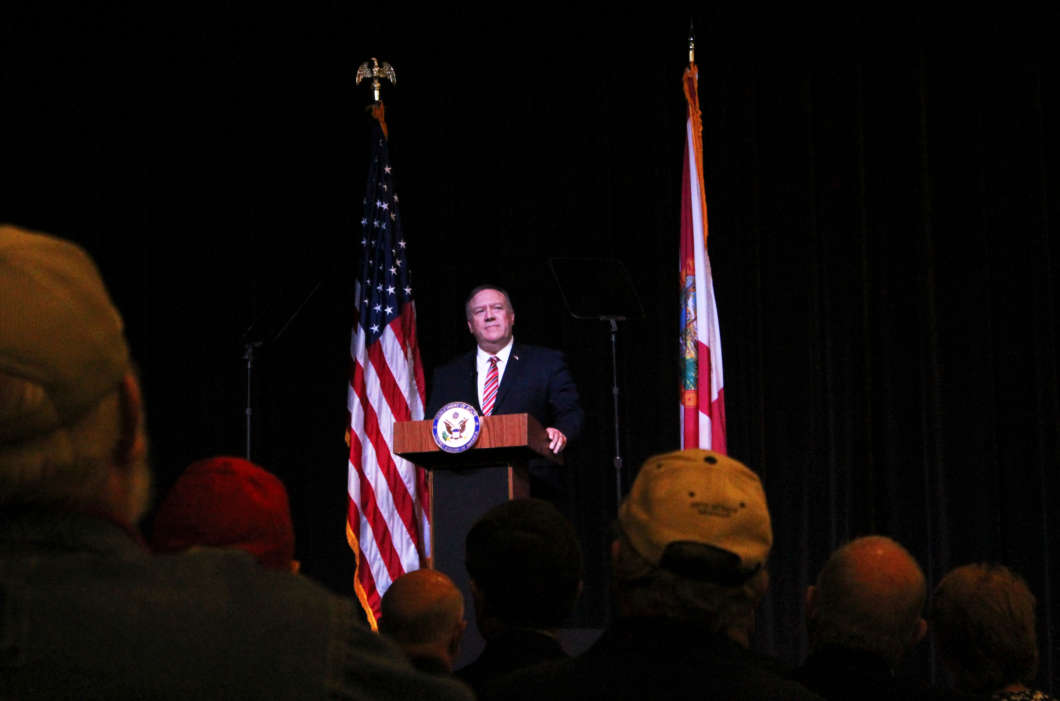 In a speech in Bushnell Thursday, U.S. Secretary of State Mike Pompeo highlighted domestic and foreign policies that he says have defined the Trump administration to a packed crowd at the Sumter County Fairgrounds.

Great discussion today in the Sunshine State. America stands for liberty, for #religiousfreedom, for free market capitalism, and for opportunity. It’s as true today as it has ever been. pic.twitter.com/shrhGF4ptI

Pompeo said U.S. domestic and foreign policies had been influenced by American values of religious and economic freedom under the Trump administration.

He said the U.S. killing of Iranian General Qassem Soleimani in a drone strike in Baghdad illustrates all three.

“Lots could have potentially gone wrong. But President Trump made the courageous decision that said ‘we’re going to protect America, we’re going to defend America’.”

Mary Peters, who came to the speech wearing a giant red Make America Great Again hat and a Trump 2020 flag, says she thinks it was the right decision.

“Cause they’re tyrants and if you bow down to a tyrant just like a bully on the playground, then they just do more of the same and it escalates.”

Iran responded by firing missiles at an Iraqi base housing American military and the same day mistakenly shot down a Ukrainian plane killing all 176 people on board.

Pompeo says abroad Trump’s Phase I trade deal with China is influenced by a belief in economic free markets and a desire for fair trade with the country.

“President Trump is working to change that to create that more level playing field so that Americans will have jobs and opportunity. This is historic and important.”

Trump supporter Barb Grinder says she thinks the deal will work with time.

“I think a lot of it is steps. And he’s taken the first step. He took steps before the first step. It’s not easy. It’s going to take time and people are willing to wait.”

The deal will keep tariffs on ⅔ of goods Americans buy from China-while China will be required to buy 50 percent more American goods.

Pompeo says at home Trump’s decision to enforce a global gag rule that stops funding for international nonprofits that provide or educate women on abortions was driven by a belief in religious liberty.

He says Trump will show his support for pro-life groups by attending Friday’s March for Life in Washington, DC.

Pompeo takes photos with attendees after the event. He is expected to visit Ukraine next week. Photo: Rachel Smith

“President Trump will be there. The first time in history an American president has attended the world’s largest human rights rally.”

That’s why Dixie Ducker says she’s not happy with the impeachment trial.

“He believes in God and we are a God-fearing nation. I was raised Democrat but not the type of Democrat that I’m seeing. I ran for office and I understand it can be a nasty business but God’s with us.”