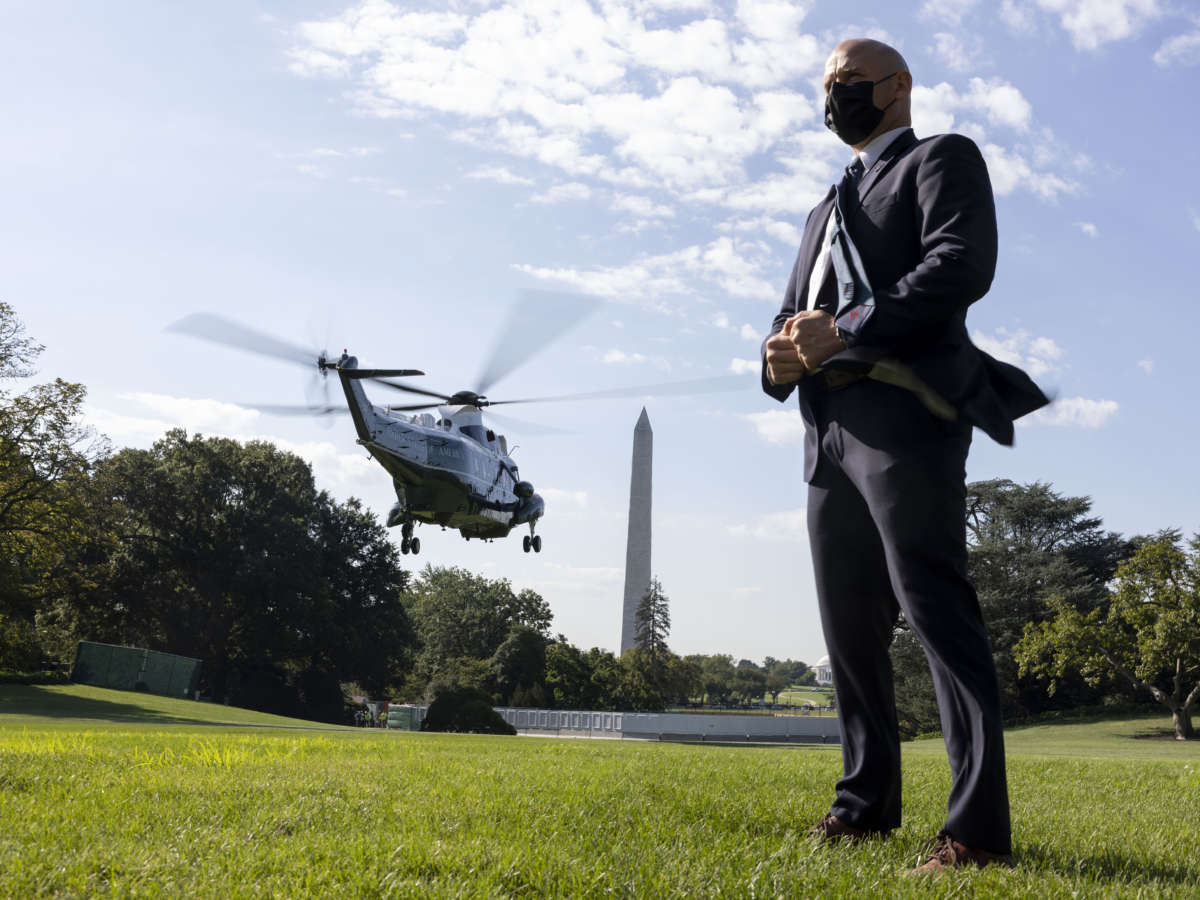 A U.S. Secret Service agent stands by as Marine One departs with President Biden aboard as he departs the White House in September 2021.
Image credit: Kevin Dietsch

A watchdog says the U.S. Secret Service deleted many of the text messages sent during a two-day period surrounding the Jan. 6 attack on the Capitol.

The inspector general for the Department of Homeland Security, which oversees the agency, told Congress the messages were deleted after his office asked for them.

The discovery was made as part of the watchdog’s investigation into the deadly siege last year and will likely play into the probe being led by the House select committee investigating the attack.

The news was first reported by The Intercept.

“The Department notified us that many U.S. Secret Service (USSS) text messages from January 5 and 6, 2021, were erased as part of a device-replacement program,” Inspector General Joseph Cuffari wrote to top members of congressional Homeland Security committees. “The USSS erased those messages after OIG requested records of electronic communications from the USSS, as part of our evaluation of the events at the Capitol on January 6.”

Anthony Guglielmi, chief of communications for the Secret Service, disputed the IG’s account.

“The insinuation that the Secret Service maliciously deleted text messages following a request is false, Guglielmi said in a statement. “In fact, the Secret Service has been fully cooperating with the OIG in every respect – whether it be interviews, documents, emails, or texts.”

The spokesman said the agency had started to reset its mobile phones in January 2021 as part of a months-long migration plan. The agency said messages were not requested until the following month. It also disputed any claims the agency hasn’t cooperated fully with the watchdog’s probe.

Guglielmi said the agency provided the IG with approximately 786,176 unredacted emails, and 7,678 team chat messages by Secret Service employees referencing conversations and operational details pertaining to Jan. 6 and preparations leading up to it.

Testimony from a witness before the House select committee investigating the insurrection in June raised new questions about the Secret Service’s role on the day of the deadly siege.

Former White House aide Cassidy Hutchinson said a physical altercation took place between then-President Trump and his Secret Service detail as he fought to get to the Capitol after telling a crowd at a rally he addressed to march on Congress.

Hutchinson, who was top aide to then-Trump Chief of Staff Mark Meadows, said in the June 28 hearing that Trump’s lead Secret Service agent Bobby Engel attempted to stop Trump as he tried to join his supporters marching to the Capitol.

“The president reached up toward the front of the vehicle to grab at the steering wheel. Mr. Engel grabbed his arm, said, ‘Sir, you need to take your hand off the steering wheel. We’re going back to the West Wing. We’re not going to the Capitol,'” Hutchinson testified. “Mr. Trump then used his free hand to lunge toward Bobby Engel.”

Secret Service sources have reportedly disputed some of Hutchinson’s testimony, but none have testified to that under oath.

That account sparked discussion about additional evidence of interest to the committee. The text messages might have been able to clear up questions related to Hutchinson’s testimony.

Hutchinson also detailed in that public hearing that the Secret Service was aware that rioters were armed at Trump’s rally at the Ellipse. That could signal a lack of communication with other law enforcement agencies who were unprepared for the riot.

In his letter to the Senate and House Homeland Security committees, Cuffari offered to brief members on the new developments around the text messages.

“We need to get to the bottom of whether the Secret Service destroyed federal records or the Department of Homeland Security obstructed oversight,” Peters, D-Mich., said in a statement. “The DHS Inspector General needs these records to do its independent oversight and the public deserves to have a full picture of what occurred on January 6th.”

A spokesman for the House Homeland Security panel said it also expects to meet with Cuffari.

The chairman of that committee, Rep. Bennie Thompson, D-Miss., also heads up the Jan. 6 panel, likely ramping up its investigation into the new evidence.