Listen in: Second Harvest volunteer Al Delio says feeding struggling families during the pandemic has given him new purpose 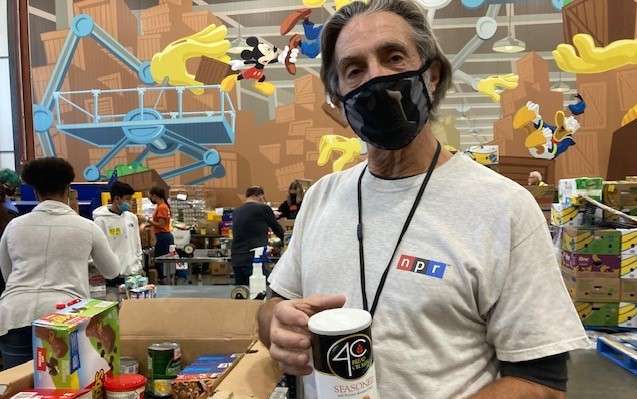 Second Harvest Food Bank of Central Florida distributes a quarter of a million meals every day to families in need. WMFE met up with retiree Al Delio who has volunteered at the food bank since 2016 to talk about what this work means to him.

Listen in: Meet Second Harvest’s new President and CEO Derrick Chubbs. This is his vision for the food bank in 2022.

Al Delio started volunteering at Second Harvest in 2016, years before a pandemic would ravage Central Florida and the rest of the globe, leaving 1 in 7 adults and 1 in 5 kids in the area food insecure.

In that time, he’s logged over 1,200 volunteer hours and has become a volunteer captain.

He oversees meat donation sorting, something that still makes him chuckle to this day.

“Which is kind of ironic, because I am vegetarian. Come and ask me, ‘What do you think of this?’ And I’m like, I think to myself, I wouldn’t eat it, but it is good food,” Delio says.

Delio says the food bank receives upwards of 10,000 pounds of fresh meat a day in donations. Most of the meat comes from local grocery stores like Publix and Kroger. But he says that’s supplemented by Amazon as well.

The meat gets delivered on pallets and the volunteers including Delio check that it’s still in date, looks like it should (not green), and then sort it by type. That’s crucial as some of the community partners the meat will be distributed to can’t accept pork for religious reasons.

“So they want to make sure when they get a pallet of beef, it’s all it’s all red meat. We call it red meat, because it could be beef, lamb, veal, bison,” Delio says.

Delio estimates he’s averaging about 35 hours a week as a volunteer at Second Harvest. The retired engineer, says it’s practically a full-time job, which is a good thing. It’s given his life new meaning and purpose.

“You know, otherwise, I’d be sitting at home, you know, watching TV, you know, eating too much. You know, just, this actually gives me a purpose gives me a reason to get up in the morning, get out and, you know, get down here and get to work,” Delio says.

Delio says volunteering is in his blood. He grew up Catholic, and charity is one of the tenants of the faith.

One scripture verse in particular still drives his volunteer work to this day, which also includes building homes with Habitat for Humanity. It’s from the Bible, Luke 12:48: “Whomsoever much is given, much will be required.”

Delio feels like it’s his time to give back and to help his neighbors. And together with over 20,200 volunteers, that’s what he’s done. In the past two years, the food bank has prepared 96 million meals for local families. That includes during the latest Delta surge that hit Florida particularly hard.

Delio wanted to join the Peace Corps in college, until student loans got in the way. After graduation, he had to take a full-time job to pay them off instead of signing up for a year of service. Now, he says he’s ready to devote the next 40 or so years to serving others.

“After working 45 years, now I can I can volunteer 45 years, God willing, and I can give back,” Delio says.

Delio says he encourages all retired people, to consider volunteering a few hours a week at Second Harvest or with their local food bank. He says the work isn’t strenuous and only requires minimal training.

“Because we will train, we can train we can train anybody to do this, I feel and you know, it’s important work and retirees. Instead of sitting around at home getting old, they should be here and staying young,” Delio says.

Listen to Delio’s full story, by clicking on the clip at the top of the page. To learn more about the work Second Harvest is doing, click on the link.