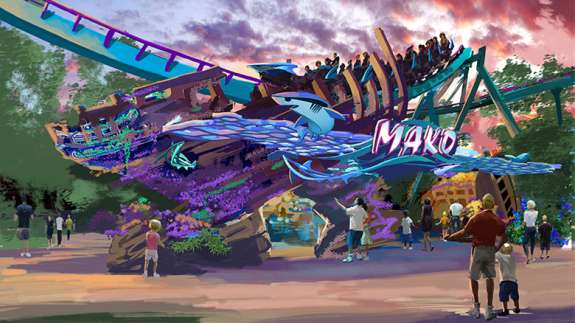 SeaWorld released details about its new shark-themed roller coaster Wednesday. The theme park says it will be Orlando’s tallest, longest and fastest roller coaster, hitting speeds of 73 miles per hour.

Derek Poitras is with The Coaster Crew fan club. He rides coasters around the world and is looking forward to this one.

“We haven’t seen anything this big since Busch Gardens down in Tampa announced their SheiKra roller coaster. But now that we have something of that caliber here in Orlando, it’s definitely going to attract the biggest and the best coaster enthusiasts to ride this,” said Poitras.

In a press release, SeaWorld says the coaster will be the centerpiece of a new shark- themed two-acre plaza with a grill, shops and educational experiences featuring sharks. Several shark species are near extinction.

“It’s this blend of education and thrills, immersing guests in an underwater world, that sets a SeaWorld ride apart from others,” said Brian Morrow, SeaWorld’s attraction creative director.