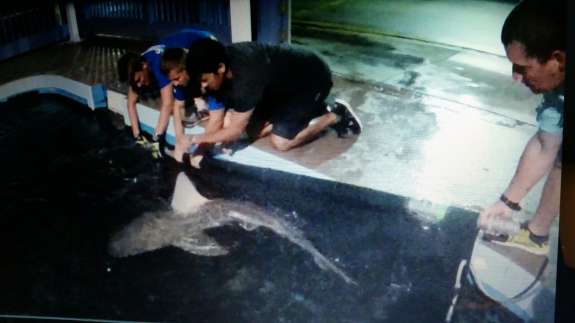 Three Sandbar sharks are having an unexpected stay at SeaWorld Orlando. The adult male sharks were being transported from south Florida to a New York aquarium when a semi lost control after a blowout on I-95.

Florida Highway Patrol Sergeant Kim Montes says the sharks were in aquariums when the accident happened in Volusia County Wednesday.

“It was determined that one of the sharks was either thrown out, jumped out, somehow got out of the aquarium and did die on the scene in the trailer,” said Montes.

The SeaWorld Orlando Rescue Team went to the scene Wednesday night and took the remaining three for care. SeaWorld says the sharks are doing well and that it will care for them as long as need be.

The driver and two passengers in the accident are OK.