Searching The Streets And Woods For Orlando’s Homeless Veterans 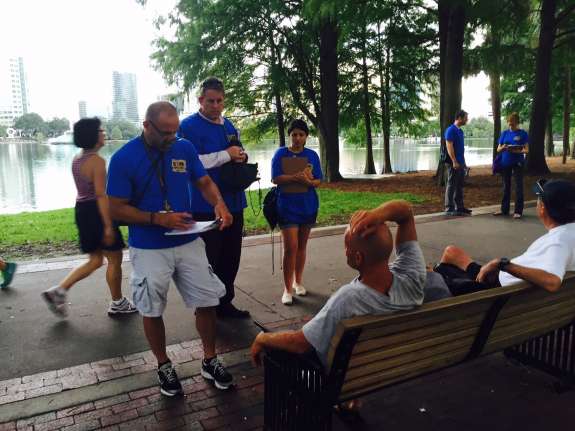 Last week hundreds of volunteers combed central Florida looking for homeless veterans like Robert Stoner “Army, E-5, which is a sergeant, ’72 to ’74, I was verifying MIA’s and POW’s that was my job,” said Stoner.

Stoner was resting in the shade outside our studios when we came across him. He suffers from PTSD, his left leg is amputated below the knee, the local VA knows he’s out there.

He’s exactly the kind of person hundreds of volunteers were searching for as part of a tri-county push to get homeless veterans off the streets and into housing. 90.7’s Catherine Welch joined them on their search and has this story.

Dewey Wooden directs his team of volunteers around Lake Eola passing families, tourists and joggers. They’re looking for anyone who appears to be homeless. The group wears matching bright blue t-shirts that say “rethink homelessness” and carry clipboards with forms to fill out, along with green and purple bags full of supplies.

“I see one green bag already did they ask you questions already,” asks Wooden. “You mind answering questions? No problem,” he said to the man on the bench.

Most of them refuse to answer any of his questions.

“At some of the food sharings I was at, people were more willing. Here at the park, if they’re here now there’s a good chance they’ll be here tonight they won’t go into a shelter,” said Wooden, “so if they’re in the park at this point they’ll be reticent to answer questions.”

And this is where David Williams thinks he can be of use – connecting to the homeless and drawing them out. He approaches a man on a bench eating a hotdog. “You got a paper to turn in,” Williams asked.

Veteran David Williams is moving into housing after 17 years on the streets./Photo: Catherine Welch

It’s pure chance that put Williams here, on this night, at Lake Eola. Two weeks ago he was that man on the bench. But somehow he found out that there was something, he wasn’t sure, but something was happening at the First Presbyterian Church in downtown Orlando. It turned out to be a press conference. Williams patiently waited until it ended then went up front and told Andrae Bailey, the head of the Central Florida Commission on Homelessness, how he was an Army veteran living on the streets.

It went on and on for 17 years, until now. Because Williams just happened to be in that church when the city was focused on getting veterans like him off the streets, he is now on the other side of homelessness and on the other side of being regularly beaten, robbed and hassled.

That gratitude fuels Williams as he spends long days combing downtown Orlando looking for other homeless veterans. He found one in the library. He wasn’t sure he was reaching the man until he told him this …

“That he’s not alone, that he’s not alone no matter what,” Williams said, “up until that time he had his head down when he was giving the information and when I said that he looked up, so I think that touched him.”

At Lake Eola one or two people end up giving their information, none of them veterans.

The Search For Homeless Veterans Moves Into The Woods

So the search continues, this time in Bithlo, a rural community just a stone’s throw from the University of Central Florida.

The Hope Team’s Nancy Martinez and her team cruise the streets in her white Suburban looking for worn foot paths into the woods, it’s a sign of a possible homeless camp.

Just off the main road, near the Bithlo Baptist Church, she sees a man walking down the street with a 14 oz. soda and a cigarette. He leads her to a trailer where brightly colored extension cords run through the back yard into a patch of dense trees. It’s home to about a dozen people.

They call their camp “Nashville,” after the land owner who they say charges them $200 a month to camp there. Scott Nash, no relation to the landlord, is the one who lead us here. Drugs and alcohol drove him out of the family home about five years ago. He said he’s clean and almost sober.

He makes money taking day jobs roofing, but he wants a regular job. “Even if I could work at McDonald’s with no high school diploma if I made a couple hundred bucks a week steady it would mean something,” he said.

A volunteer gets information from a homeless veteran camping in the woods in Bithlo./Photo: Catherine Welch

Closer to the trailer, a couple climb out of their grey and blue tent, a handful of kittens spill out of the tent as well. The Hope Team’s Nancy Martinez approaches them, offering help. Melissa Goguel explains how everyone here works as a team. And right now the team is worried about Dave, who’s having trouble with his colostomy bag attached to his side with duct tape.

“He rinses it out,” she said, “and duct taped it on after he fell and it broke.”

Martinez presses for Goguel to get Dave out of the woods to talk.  She’s seen people like Dave before. “There are doctors who won’t touch it because of the severity, any doctor that tries to help it could be a liability,” said Martinez.

Dave comes out of the woods and gives his information.

Martinez keeps her eye on the trailer. She’s nervous. The landlord’s been yelling through the windows that he wants these people to get help, but Martinez frets that he’ll kick them out and they’ll have nowhere to go.

“I’m really, really, leery about us staying in his back yard,” said Martinez. “I think we need to bring the outreach somewhere else because we’re bringing too much attention, you can hear the screaming inside, we have to get out of here.”

Martinez packs up and leaves, the group got information on most of the people living in at the camp.

She followed up on Dave and just a few days later her healthcare team help him with the colostomy bag. Dave’s a veteran but he was dishonorably discharged, so it’s unclear what kind of help the VA can provide.

The week-long surge turned up more than half of the estimated 300 homeless veterans in the area, 41 of them were found in jail.