Search Resumes For Missing AirAsia Flight With 162 Aboard 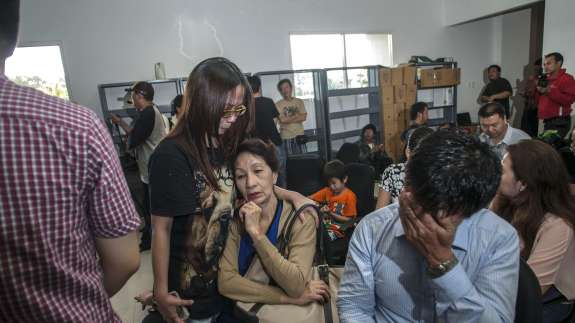 Ships and planes have resumed the search for AirAsia flight QZ8501, which lost contact with air traffic control on Sunday. The search efforts, which were suspended overnight, picked up again at dawn, The Associated Press reports.

Bambang Soelistyo, the head of Indonesia’s search and rescue agency, says that the plane has likely crashed into the ocean, Reuters reports. Soelistyo calls that an “initial estimation.”

The flight, traveling from Indonesia to Singapore, lost contact at 7:24 a.m. local time, AirAsia said on its Facebook page; that’s about an hour before it was due to land. The airline said 155 passengers and 7 crew members were on board the Airbus A320.

Shortly before losing contact, the pilot had asked to change course due to weather conditions. There was no distress call, officials said.

At a news briefing Sunday, AirAsia group CEO Tony Fernandes emphasized that the airline does not know what happened. “Let’s just wait and see. We don’t want to speculate,” he said.

“We are deeply shocked and saddened by this incident,” AirAsia Indonesia CEO Sunu Widyatmoko said in a statement. It’s the first time the low-cost regional carrier has lost a flight, NPR’s Anthony Kuhn reports.

But an air crash search and rescue expert warned against comparing the disappearance of flight QZ8501 to that of flight MH370, telling AP that there is more information available about where QZ8501 was when it lost contact.

In Singapore’s Changi airport, Channel News Asia reports, dozens of friends and family members of QZ8501 passengers gathered amid tight security in a holding area where media were not allowed to enter and counselors were available. Some accepted an offer to be flown to Surabaya, Indonesia, where the flight took off, and where other family members were also gathered and waiting for news.

The initial search for the plane was hampered by rain and temporarily called off when night fell; it resumed after dawn on Monday morning.

AP reports that First Admiral Sigit Setiayana, the Naval Aviation Center Commander at the Surabaya air force base, says visibility is good, and ships, planes and helicopters are all searching for signs of the plane.

“God willing, we can find it soon,” Setiayana says.