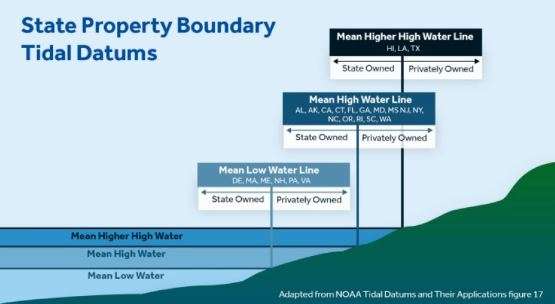 Rising seas will shift tidal boundaries, leading to the loss of taxable properties, according to a new study. This is expected to impact the tax base of hundreds of U.S. coastal counties, with Florida being the state most affected.

Using the latest climate models and current emissions data, researchers with Climate Central, a nonprofit news organization that analyzes and reports on climate science, have determined that private property owners across the U.S. will lose an area the size of New Jersey by the year 2050.

Don Bain, an engineer and senior advisor for Climate Central, said Florida has the most properties that will be impacted — more than 140,000 by 2050.

His team generated more than 250 individual county reports to identify any potential movements of public-private property boundaries. He said the losses will result in less property tax revenue.

Click here to find analysis results in your county

“It’s very situational dependent upon the county, how much they’re dependent upon property tax revenues and the potential impact to those revenues as a result of the loss of the current tax land tax base,” Bain said.

“It’s not only a question of losing the revenue associated with property tax, but very often it comes at the same time you’re having to spend money on flooding, interventions clean up, and etc. So, while revenues are going down, quite often, expenses are going up.”

Monroe and Miami-Dade counties will be most affected in Florida, according to Bain.

It’s not just coastal counties that will be affected with the shifting tidal boundaries, Bain said.

“So, it’s moving inland. The consequence of that is you have you find saltwater intrusion in the freshwater wells.”

But Bain called himself an optimist and said there are some ways to create resilience at the community level, like preventing growth in high-risk areas, and participating in the National Flood Insurance Program.

“We encourage people to use science-based analysis like we’ve done here to inform their investments — in these investments and adaptation include things like improving the stormwater system, potentially implementing intervention trends like levees and storm walls or sea walls where they’re possible,” Bain said.

“Lastly, we encourage citizens to get educated and to participate in the planning … so they can be part of designing a better future for these cities as we’re forced to move and adapt.”