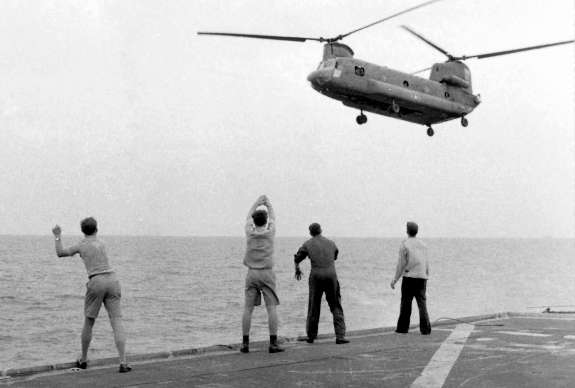 Aboard the USS Kirk, crew members signal the Chinook to hover over the deck and drop its passengers out. April 29, 1975. Photo courtesy of Hugh Doyle

It’s been 40 years since the fall of Saigon and WUCF-TV is marking the anniversary with a documentary about the last days of the Vietnam War. The film, “Last Days in Vietnam” was directed by Rory Kennedy. WUCF-TV’s Catherine Hiles says the film documents the chaotic final days of the Vietnam War as the North Vietnamese Army closed in on Saigon.

“The American military was working kind of on black ops to try and get as many people out as possible, so it follows that evacuation of Saigon and the surrounding towns,” said Hiles.

The “Last Days in Vietnam” screening starts at 7 p.m. Wednesday at the Orlando Science Center. The event is free and open to the public.
The film is part of a special week of public TV programming next week to mark 40 years since the fall of Saigon.