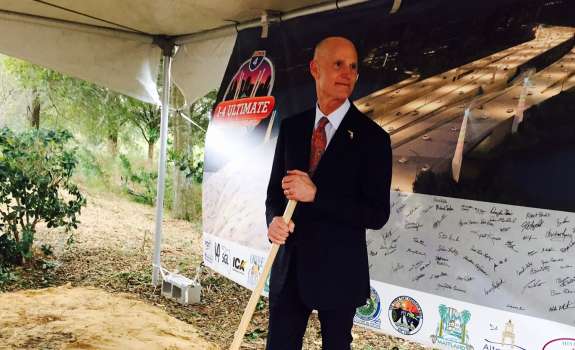 Governor Rick Scott says he’s suing the federal government over a move that links a critical hospital funding program to a Medicaid expansion under the Affordable Care Act. The Governor says that amounts to coercion.

The U.S. Supreme Court ruled the federal government could not coerce state’s to expand Medicaid—and invalidated part of the Affordable Care Act that made expansion mandatory. The Governor says a decision by the federal government to tie the Medicaid expansion issue to ongoing negotiations over a separate program that reimburses hospitals for uncompensated care, is unconstitutional. House Speaker Steve Crisafulli agrees.

“I think we talked about that yesterday in the gaggle. I mentioned the Sebelius vs. NFIB case that took place, and I think the Governor acted upon the merits of that case,” he told reporters Thursday.

Florida has not received on a decision on the $2 billion dollar Low-Income pool funds and the lawsuit comes as the state plans to formally request an extension to the program. Meanwhile the Senate has crafted a privatized version of a Medicaid expansion, but the House isn’t going along. That’s led to a deep division in budgeting and lawmakers are prepared to go into overtime, says Senate Appropriations Chairman Tom Lee.

“I think as session progresses and the opportunity to bring this in for a landing in 60-days appears to be extinguishing at this moment, I think pressure mounts and people react differently,” Lee said Wednesday afternoon after a confirmation of Agency For Healthcare Administration Secretary Liz Dudek.

At stake is critical funding to safety-net hospitals that treat large numbers of uninsured patients. Florida AHCA’s Dudek told a Senate panel some hospitals could be hurt badly if they lose LIP funding.

Also at stake is access to health insurance for up to a million more uninured Floridians currently stuck in what’s called the coverage gap. They make too much money for the state’s current Medicaid program, and too little to get federal help to purchase insurance. Joan Alker, a Georgetown University Medicaid expert, says Florida’s decision to sue the federal government doesn’t help either problem:

“This is a disappointing turn the Governor has taken. He’s really done a 180 from a few years ago when he expressed support for extending Medicaid coverage to Floridians who really need it,” she said.

The Governor initially supported a Medicaid expansion, but said a few weeks ago he could no longer support expansion if the federal government withdrew funding for the Low-Income Pool program. Florida is only a handful of states with the special hospital funding, and has known for a year the LIP program was going to go away. Still, she’s trying to stay optimistic:

“I remain guardedly, and possibly not realistically…that cooler heads will prevail and the Senate House and Governor will be able to come together.”

“I’m hopeful the wiser heads will prevail and that the House version of the budget which does not include Medicaid expansion will carry the day,” says Sal Nuzzo, Vice President of Policy at the free-market think tank, the James Madison Institute.

The Institute is opposed to Medicaid expansion and says it doesn’t solve the underlying problem of cost increases that have made health insurance unaffordable to many. And Nuzzo applauds Governor Rick Scott’s decision to sue the federal government. He believes Floridians shouldn’t take a cynical view on the Governor and the legislature—but views the stalemate as a critical policy debate for the future of healthcare going forward.

“We’re doing and we’re showing that well-intentioned and well-meaning individuals in Tallahassee can look at a difficult issue and engage in a debate that will impact Floridians for generations,” he says.

That debate will soon head be heading to court. The federal government doesn’t comment on pending litigation. However in a statement, a spokesman for the Federal Centers for Medicaid and Medicare services, says the state is free to make its own decision on Medicaid expansion. Spokesman Ben Wakana says the agency is looking forward to the state submitting a new proposal on how to fund the low-income pool based upon CMS’ previous requests for changes in the program that increase transparency and divide the funding more evenly between hospitals.