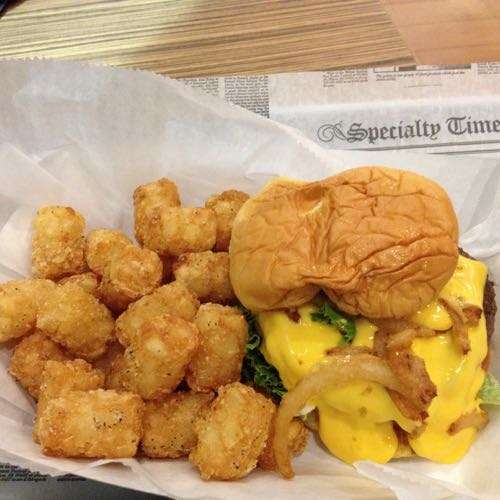 The burgerfication of Central Florida shows no signs of letting up. Burgers have always been a popular food item, but in the past few years, we’ve seen a veritable explosion of the category. Joining Five Guys recently have been BurgerFi, Burger 21 and Shake Shack. Smashburger, another popular national chain, has come into the area, and Wahlburgers, from celebrity brothers Mark and Donny Wahlberg, will hit town in 2015.

And now we have a homegrown burgerie, a nonchain (so far) and from a local restaurateur, Manny Tato, owner of Spice Modern.

That restaurant lends its name, if not all of its vowels, to Spice Burgr — that’s b-u-r-g-r. — which has opened in the ground level of the Plaza highrise in downtown Orlando.

The space is not very attractive and rather spartan in its decor, but Spice Burgr has something to recommend, and that would be its burger, which is pretty darned good.

The meat is touted as “all organic, all natural and grass-fed” with no hormones, antibiotics, fillers or nitrites. The result is a patty that tastes like meat. I ordered a “traditional,” which is a basic burger with lettuce, tomatoes, onions and cheese with mayonnaise and pickles on a buttered bun.

The patty was juicy, thick enough to be cooked to order, and it still had plenty of pinkness in the middle. The cheese seemed to be a pre-melted ladled on sort of substance that wasn’t bad but wasn’t what I would have preferred.

I got the burger with a side of tater tots that weren’t very flavorful as totted potatoes go. They were easy to push aside.

The staff is eager and helpful and the food comes out of the kitchen at a decent pace. A good choice for downtowners on a lunch break.