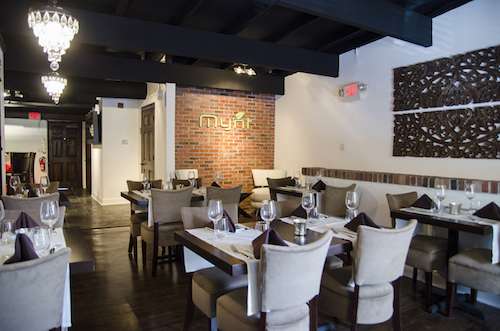 Mynt has moved into the Hannibal Square neighborhood, and just like its similarly spelled namesake, it’s a refreshing addition.

Unlike many Indian restaurants, Mynt takes a fresher and more healthful approach to its food. In fact, it uses no ghee, the type of clarified butter that is somewhat of a staple in Indian food. Instead, the kitchen uses more olive oil in the recipes.

And it doesn’t change the quality — all of the dishes I sampled were wonderfully luscious. And the levels of spicing were just as complex and multilayered as you would expect from good Indian cuisine.

I especially liked the Chicken Xacutti, a Goan dish that uses just about every Indian spice you can think of and then adds a bit of coconut to the curry.

I also liked the Lamb Pasanda, which, according to the menu, was derived from a dish served in the court of the Mogul emperors. It had cardamon and chilies, though was served mild, with ground cashews in the rich sauce. Both of the entree dishes were wonderful over the fluffy basmati rice or sopped with the chewy garlic naan.

In keeping with the more healthful theme, the Delhi Samosa is one of the few items on the menu that is fried. The traditional turnovers were filled with well-spiced potatoes and peas and were quite delicious.

My server was confident and professional and gladly made recommendations when I asked for guidance.

The restaurant also has a new app, which has a really cool loyal diner feature. Each time you dine at the restaurant, you click on a plate icon then hand the phone to your server who enters a special code to verify your purchase. No need to carry a card around in your wallet.

Of course, a feature that rewards you for frequent dining only matters if it’s at a restaurant you want to dine in frequently. I think Mynt will be one of those places.