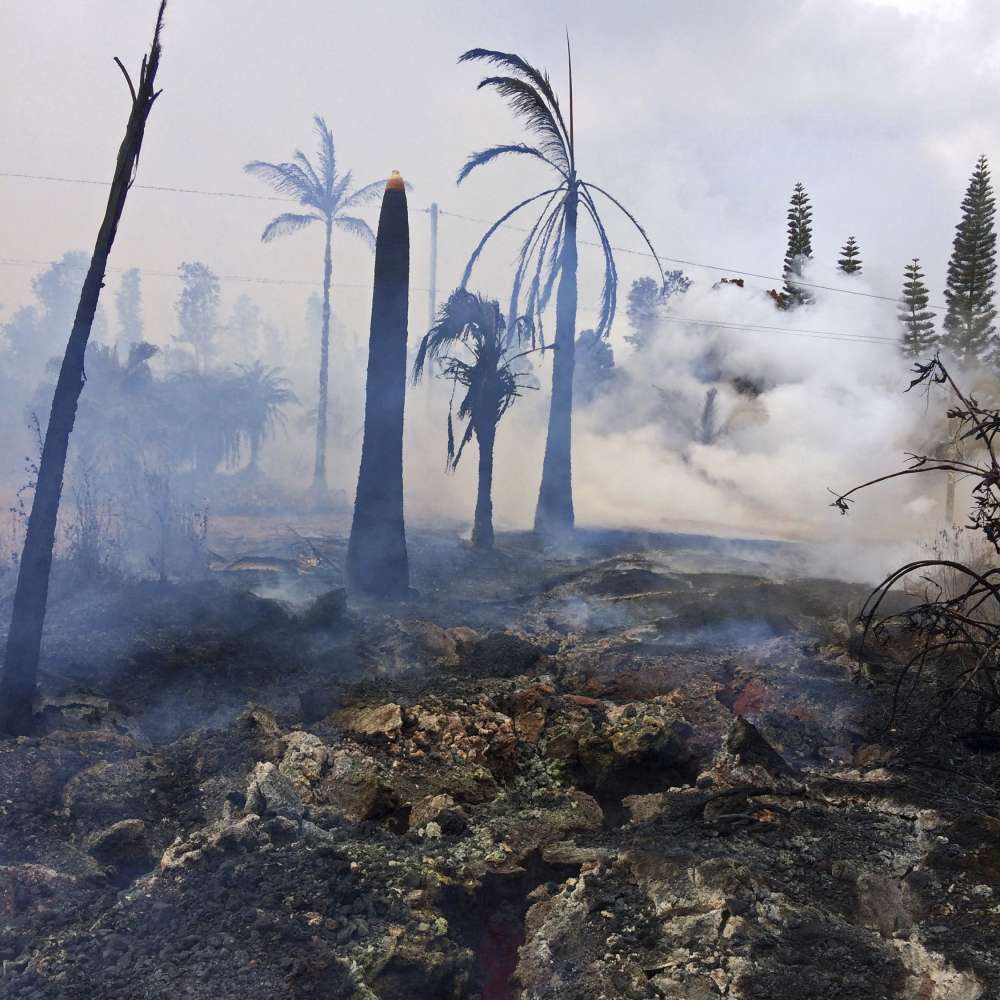 This photo provided by the U.S. Geological Survey shows severe ground cracks associated with what's known as Fissure 14 beneath a burned-out landscape in Leilani Estates near the town of Pahoa, Hawaii, on Wednesday.

Geologists are warning that Hawaii’s Kilauea volcano – which has been belching toxic gas and oozing lava into a residential area for the past week — could erupt explosively in the coming weeks.

The possibility of such a sudden eruption will increase as lava flows from Kilauea’s summit crater down its face and magma falls below the water table, the U.S. Geological Survey says. That could create steam pressure that would then explode, it says.

The volcano could then eject “ballistic rocks” of lava up to several feet in diameter, the USGS said.

Kilauea, one of the world’s most active volcanoes, began spewing lava into the Leilani Estates residential area a week ago after its increased activity was foreshadowed by dozens of small earthquakes.

The warning comes as volcanologists in Hawaii report a new fissure at the entrance to another residential area on the Big Island, where thousands have already been forced to evacuate.

The Hawaiian Volcano Observatory confirmed Wednesday that a new fissure appeared in Lanipuna Gardens, making a total of 15 such surface cracks where molten lava and gas are escaping, according to Hawaii Public Radio. Lanipuna Gardens, near the town of Pahoa along the island’s east coast, is adjacent to Leilani Estates, which has been engulfed in lava.

HPR says no one is being allowed access to Lanipuna Gardens, but that at neighboring Leilani Estates, residents were allowed in long enough to retrieve their property.

So far, 36 structures have been destroyed by the lava flow.

Don Swanson, a geologist with the Hawaiian Volcano Observatory, told reporters that the magma is likely to drop below the water table around the middle of the month.

“We suspect it’s a rapid process. We really don’t know for certain,” he told reporters on a conference call.

The Puna Geothermal Venture plant has about 50,000 gallons of pentane on site but he expected this would all be removed by the end of the day Thursday.

It would be ‘very, very hazardous’ if a volcanic vent were to open under the facility where the fuel is stored, the governor said.”