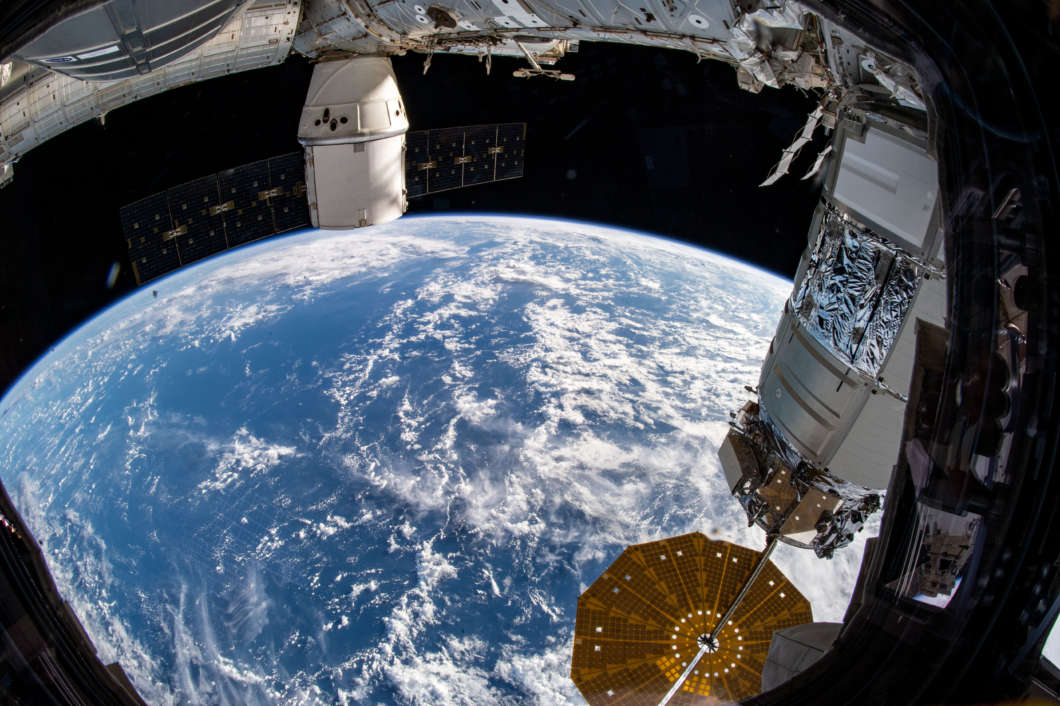 The SpaceX Dragon cargo spacecraft that ferried musclebound mice to the International Space Station and back can be seen at the top of this picture taken from the station on Dec. 20, 2019.

In early December at the Kennedy Space Center in Florida, two anxious scientists were about to send 20 years of research into orbit.

“I feel like our heart and soul is going up in that thing,” Dr. Emily Germain-Lee told her husband, Dr. Se-Jin Lee, as they waited arm-in-arm for a SpaceX rocket to launch.

A few seconds later the spacecraft took off, transporting some very unusual mice to the International Space Station, where they would spend more than a month in near zero gravity.

Ordinarily, that would cause the animals’ bones to weaken and their muscles to atrophy. But Lee and Germain-Lee, a power couple in the research world, were hoping that wouldn’t happen with these mice.

“It was worth waiting 20 years for,” Lee said as the Falcon 9 rocket headed toward space. “And someday it may really help people,” Germain-Lee added.

The couple hope that what they learn from these mice will lead to new treatments for millions of people with conditions that weaken muscles and bones. Among those who might eventually benefit: children with muscular dystrophy or brittle bone disease, cancer patients with muscle wasting, bedridden patients recovering from hip fractures, older people whose bones and muscles have become dangerously weak, and astronauts on long space voyages.

Dr. Emily Germain-Lee and Dr. Se-Jin Lee waited eagerly at Kennedy Space Center for a SpaceX rocket to launch their experimental mice into space in December. Courtesy of Jennifer Read

For Lee and Germain-Lee, both professors at the University of Connecticut School of Medicine, the launch represented a high point in a partnership that began in the late 1970s.

“We met when I was 18 and we were biochem majors in college together,” Germain-Lee said.

The Harvard undergraduates clicked. And in those early years, Emily had a teenager’s big dreams about what she and Se-Jin might accomplish.

“Wouldn’t that be amazing if one day we worked on some project together that had incredible meaning and helped people,” she recalled thinking. “All that stuff.”

The couple went to medical school together at Johns Hopkins in Baltimore.

She went on to become a pediatric endocrinologist who treated children with rare bone disorders. He added a Ph.D. to his M.D. and started a lab that studied muscle growth.

Along the way, they got married and had a son. And in the late 1990s, Se-Jin Lee got kind of famous for helping to create some bulked-up rodents known as “mighty mice.”

The mouse on the right has been engineered to have four times the muscle mass of a normal lab mouse.
Se-Jin Lee/PLOS One

Lee showed me one when I visited his lab in 2006. It had been genetically engineered to have about four times the muscle mass of a normal mouse.

Lee had altered the animal’s genes so it wouldn’t produce a protein called myostatin. Ordinarily, myostatin limits the growth of muscles. Without it, you get the mouse version of Arnold Schwarzenegger.

“If you open up the mouse and actually look at the muscles it is really unbelievable,” he told me. “These animals are almost getting to the point where they don’t really look like mice.” Lee thought his discovery might help people with diseases that weaken muscles. So he began looking for a drug that could block myostatin and duplicate the effects of genetic engineering.

Meanwhile, as Germain-Lee treated more and more children with bone diseases, she noticed that weak bones could lead to weak muscles.

“My bone patients don’t escape muscle loss because they have long periods of time where they can’t move or their whole lifetime where they’re wheelchair bound,” she said.

And because she also sees patients with diseases like muscular dystrophy, she realized it could work the other way. “Any muscle disease leads to weakness and any weakness leads to bone fragility eventually,” Germain-Lee said.

At home, the couple spent many evenings discussing muscle, bone, her patients and his work on myostatin.

“Probably most people would think we’re really odd,” Germain-Lee said. “But it’s given great meaning to our life.”

Over the years, they realized that what many patients really needed was a way to simultaneously strengthen muscle and bone. And remarkably, they eventually identified a drug with the potential to do that.

It’s a substance that affects not only myostatin, but also a protein called activin, which is involved in the growth of both muscle and bone. And it would bring together the parallel lines of research each scientist had been following for decades.

Germain-Lee wanted to test the drug on mice in her lab that developed a version of osteogenesis imperfecta, also known as brittle bone disease. “I said, oh my gosh I really have to try this, and Se-Jin said sure,” she said. “And those were the first set of experiments we did together.”

The experiments, published in 2015, were successful. The mice developed both stronger bones and bigger muscles. And the results helped inspire Lee to revive an idea he’d been pursuing for two decades. It involved astronauts.

“Astronauts in space have lots of health things that they need to be thinking about,” he said, “but certainly at the top of that list would be muscle loss and bone loss.

Without gravity, astronauts can lose up to 20 percent of their muscle mass in less than two weeks, according to research by NASA. And as muscles atrophy, bones begin to weaken too.

So starting in the late 1990s, Lee had approached NASA about funding an experiment to see whether his mighty mice maintained their muscles in space. But his efforts to interest the agency in the project “failed miserably,” he said.

That changed after the couple had moved to Hartford, where, in addition to their faculty posts at the University of Connecticut, Germain Lee holds an appointment at Connecticut Children’s Medical Center and Lee works at The Jackson Laboratory.

And it was through The Jackson Laboratory that Lee got a chance to send his mighty mice to the International Space Station.

In late 2018, the Center for the Advancement of Science in Space, which manages the International Space Station, contacted The Jackson Laboratory about potential science projects. And Lee’s new employer suggested the mighty mice.

Lee and Germain-Lee quickly assembled an experiment that included not only the bulked up rodents, but normal mice that would receive the drug that (on earth) builds both muscle and bone.

The mice, which had gone into orbit in December, were brought back to earth in early January. And since then, Lee and Germain-Lee have been hard at work analyzing what happened to the animals’ muscles and bones.

It will take months to know for sure whether any of the mice were able to defy the usual effects of weightlessness. Also scientists rarely discuss experiments before they’re published.