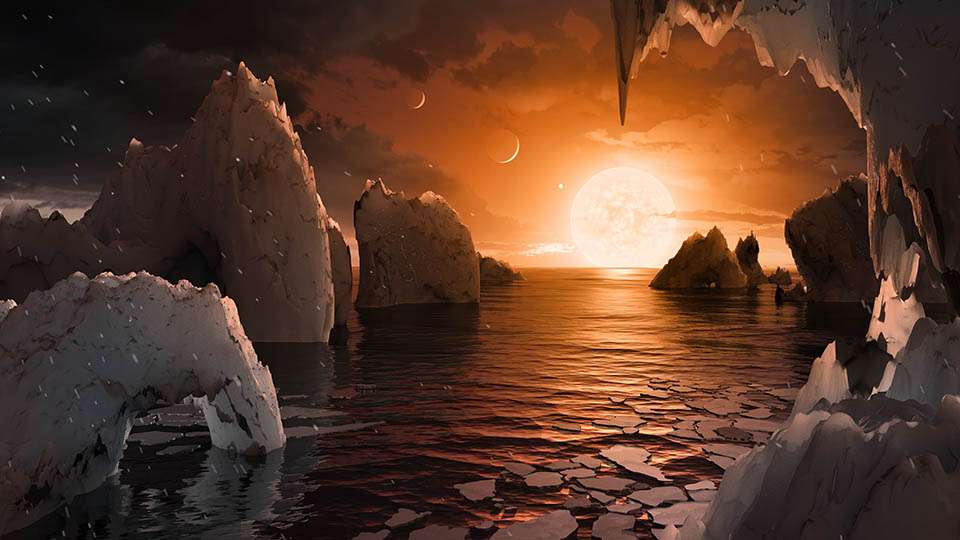 This artist's concept allows us to imagine what it would be like to stand on the surface of the exoplanet TRAPPIST-1f, located in the TRAPPIST-1 system in the constellation Aquarius. Photo: NASA/JPL

Planetary scientists discovered seven Earth-sized planets orbiting a nearby star, and some could hold the keys to life outside our planet.

The exoplanets were discovered orbiting a dwarf star about 40 light years away. Three of the planets exist firmly in the habitable zone – the area around a host star where a planet is most likely to contain liquid water.

Daniel Batcheldor, head of physics and space sciences at the Florida Institute of Technology, said discoveries of Earth-sized exoplanets reinforces the idea that these types of planets are more common in the universe than originally thought.

“We have got even more encouraging data that’s going to help support our search for life in the universe,” Batcheldor said. “It’s another piece in the puzzle that we have gathered towards answering the question of whether or not we are alone in this universe.”

The finding announced Wednesday is the largest number of exoplanet discovered around one star. Planetary scientists have discovered more that 3,000 exoplanets, many of which were announced last year.

This artist’s concept shows what the TRAPPIST-1 planetary system may look like, based on available data about the planets’ diameters, masses and distances from the host star. Photo: NASA/JPL

“This discovery could be a significant piece in the puzzle of finding habitable environments, places that are conducive to life,” said Thomas Zurbuchen, associate administrator of the agency’s Science Mission Directorate in Washington. “Answering the question ‘are we alone’ is a top science priority and finding so many planets like these for the first time in the habitable zone is a remarkable step forward toward that goal.”

Scientist discovered the planets by observing the dwarf start TRAPPIST-1. The team used Spitzer, an infraed telescope that trails the Earth as it obits the sun, to find the planets. The space telescope focuses on the star, and as each planet passes in front of the star, the light dims. By recording the dimming of the light, observers were able to determine the size of the planets from the observations.

“This is the most exciting result I have seen in the 14 years of Spitzer operations,” said Sean Carey, manager of NASA’s Spitzer Science Center at Caltech/IPAC in Pasadena, California. “Spitzer will follow up in the fall to further refine our understanding of these planets so that the James Webb Space Telescope can follow up. More observations of the system are sure to reveal more secrets.”

This is how telescopes, like @NASAspitzer, use the transit method to find plants. #exoplanets pic.twitter.com/uDsH8AKtCC

The Hubble Space Telescope conducted follow-up observations of the star and the planetary system. The James Webb Space Telescope, launching next year, will take a closer look at these planets.Webb will be able to detect chemical traces of water, methane, oxygen and ozone – key factors in determining a planet’s habitability. It will also observe the seven planets’ temperature and surface pressure.

The findings are published in this month’s Journal Nature.