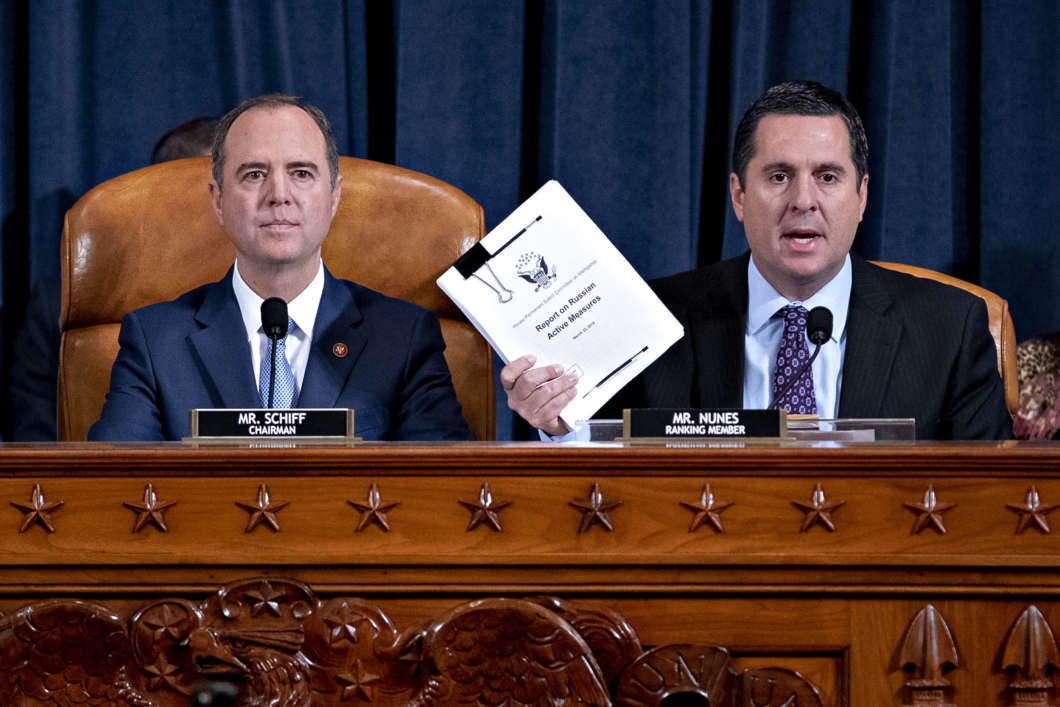 Democrats are expected to continue their march toward impeachment on Tuesday with the release of a report summarizing their case — one day after Republicans opened the bidding with a salvo of their own.

The majority on the House Intelligence Committee, led by Chairman Adam Schiff, D-Calif., is expected to release an impeachment report on Tuesday that could then set the stage for the hearing scheduled Wednesday in the House Judiciary Committee.

Schiff’s report is expected to offer another tour through a narrative that Democrats have repeated throughout the autumn.

They say Trump attempted to extract concessions this year from Ukrainian President Volodymyr Zelenskiy, conditioning engagement with him and about $391 million in U.S. assistance on commitments by Zelenskiy to launch investigations that Trump thought might help him in the 2020 election.

The White House froze the assistance for a time but ultimately released; Zelenskiy didn’t commit to the investigations that he’d discussed with Trump and intermediaries.

Democrats say the story is an abuse of power that should put Trump in peril of losing his office. Republican defenders argue that the totality of events show there was no improper exchange and the president shouldn’t be impeached.

The ranking member on the Intelligence Committee, Rep. Devin Nunes, R-Calif., detailed that case in a minority report released on Monday evening — the latest set of dueling documents between Republicans and Democrats on the intelligence panel.

Nunes’ new report summarized Republicans’ arguments that Trump was within his authority to act in the way he did; that Democrats haven’t proved that Trump committed “bribery” or any other impeachable crime, as charged; and that Democrats are simply acting out of partisan animus.

“The fundamental disagreement apparent in the Democrats’ impeachment inquiry is a difference of world views and a discomfort with President Trump’s policy decisions,” Nunes’ report said.

Nunes and his colleagues also underscored during Schiff’s open impeachment hearings that aid for Ukraine, although frozen, was never cut off and Zelenskiy never committed to any investigations.

Moreover, Zelenskiy underscored to interviewers this week what a difficult position he was in — both wanting to accommodate Trump, but doing so appropriately, while continuing the military and other assistance Ukraine needs to continue to fight Russian and Russian-backed forces after their invasion of 2014.

“Look, I never talked to the president from the position of a quid pro quo,” Zelenskiy told Time Magazine and other news organizations.

He continued: “That’s not my thing…. I don’t want us to look like beggars. But you have to understand. We’re at war. If you’re our strategic partner, then you can’t go blocking anything for us. I think that’s just about fairness. It’s not about a quid pro quo. It just goes without saying.”

Trump called Zelenskiy’s remarks a vindication and Republicans also have cited Zelenskiy’s earlier comments — including that he never felt “pressured” by Trump — because they say it’s evidence that nothing improper occurred.

House Speaker Nancy Pelosi and majority Democrats in the House are undeterred.

Chairman Jerry Nadler, D-N.Y., and his members are set to take the baton from Schiff on Wednesday with the next open hearing in the impeachment inquiry.

Nadler announced a panel of law school witnesses which he said will help lawmakers understand the historic and constitutional grounds for impeachment.

Democrats invited Trump to participate but White House counsel Pat Cipollone made clear that the administration still considers the process baseless and unfair.

Judiciary Committee ranking member Rep. Doug Collins, R-Ga., also faulted Nadler on Monday for how late Democrats had announced their witnesses and how recklessly Collins said the majority was moving — at once speeding along but also not affording fairness or clarity to Republicans.

Depending on what time Schiff’s report appears on Tuesday, for example, Republicans may have only about a day to review it before the hearing is scheduled to convene the following day.

“For the first time in history, this committee will weigh impeachment without any evidence for us to review. Any discussion with the yet-to-be identified witnesses will, therefore, be in the abstract,” Collins wrote to Nadler.

Continued Collins: “Regarding the White House participation in this sham inquiry, White House Counsel Pat Cipollone wrote you yesterday evening, “the countless procedural deficiencies that have infected this inquiry from its inception . . . shows the lack of seriousness with which you are undertaking these proceedings.”

Pelosi and her lieutenants have said impeachment isn’t a foregone conclusion but must be the result of the ongoing process in Congress. That’s one reason why Democrats have declined to give a timetable by which they hope their work would be complete, because they argue that although they want to work as quickly as possible the job must be done right.

Impeachment is the equivalent of a grand jury indictment — a statement by the House that it believes there’s sufficient evidence for a trial in the Senate over whether Trump keeps his office.

Republicans control the Senate and Majority Leader Mitch McConnell, R-Ky., has said he thinks it’s “inconceivable” that the sufficient 20 Republicans would side with Democrats to remove the president.

Schiff and others have argued that all they can do is what’s within their power in the House and that if impeachment serves as a deterrent to a future president of the kind of activity in which Trump has engaged, it was worth doing.

Nadler also asked — in response to Cipollone’s letter — why an administration that says it has done nothing wrong isn’t taking part or cooperating with lawmakers requests for information about of the Ukraine affair.

“The American people deserve transparency,” Nadler said. “If the president thinks [his call with Zelenskiy] was ‘perfect’ and there is nothing to hide then he would turn over the thousands of pages of documents requested by Congress, allow witnesses to testify instead of blocking testimony with baseless privilege claims, and provide any exculpatory information that refutes the overwhelming evidence of his abuse of power.”