Saule Omarova gets candid: Banks sank her nomination to become a key regulator 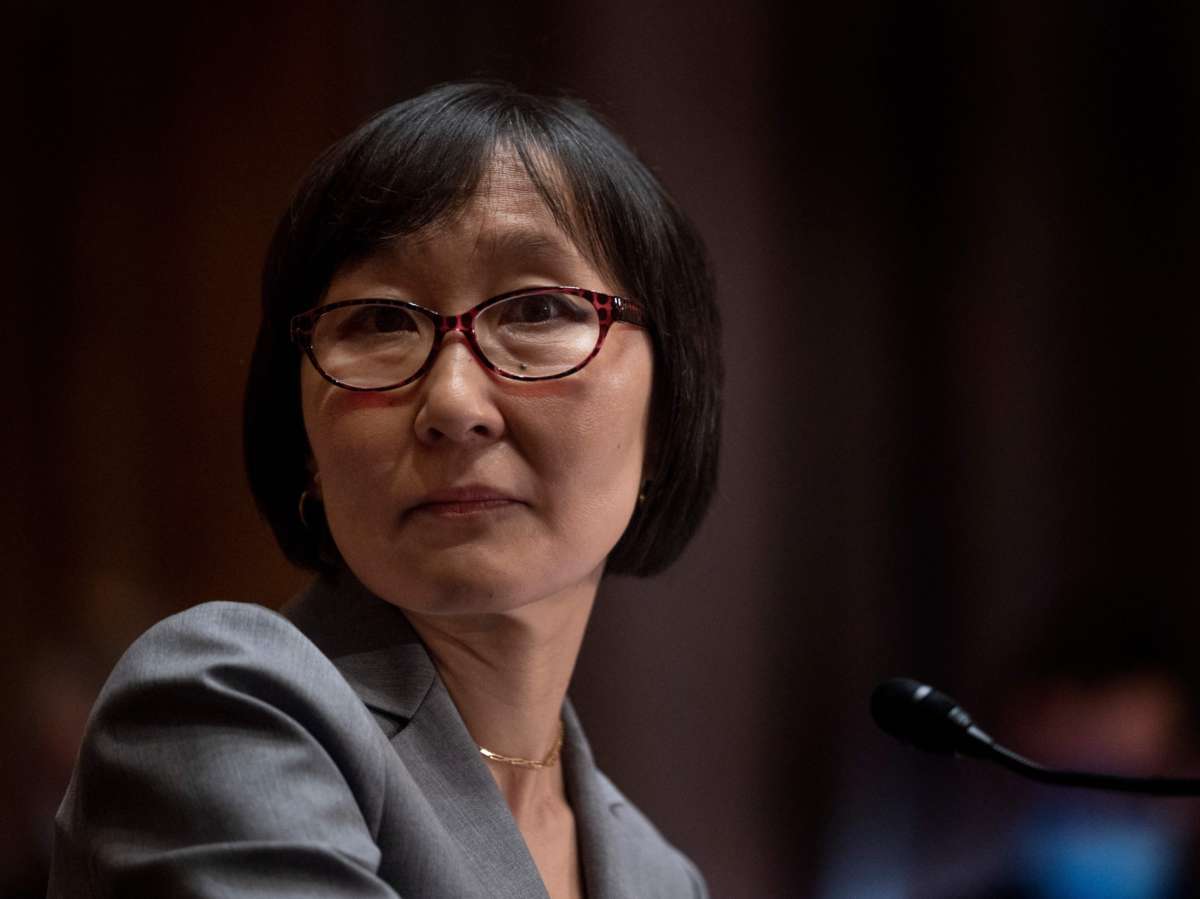 Saule Omarova testifies before the Senate Banking Committee on Nov. 18 during her nomination hearing to head the Office of the Comptroller of the Currency. Days after withdrawing her nomination, Omarova blamed banks for leading the opposition against her in an interview with NPR's Morning Edition.
Image credit: Jim Watson

Saule Omarova blamed the banking industry for helping to sink her nomination to become one of the country’s top banking regulators, saying they distorted her research, which led to an environment in which attacks against her became unfair and personal.

Omarova made her comments to NPR’s Morning Edition host Steve Inskeep in her first interview since she withdrew her nomination last week to head the Office of the Comptroller of the Currency (OCC), which oversees more than 1,000 U.S. banks.

The Cornell University law professor had faced unusually direct attacks from some Republican senators and conservative groups during her nomination, including outright suggestions that Omarova, who was born in the then Soviet Union, held “communist” views.

Omarova, who is a U.S. citizen, has strongly denied that.

Omarova said she had been taken aback by the nature of the attacks, saying those opposed to her nomination mischaracterized her work and demonized her.

“The substance of my scholarship has been completely distorted. It’s been effectively turned into caricature,” Omarova told NPR.

“I wasn’t prepared for that,” she said of the attacks against her.

As a professor, Omarova has proposed influential but unorthodox reforms to the U.S. financial system, and advocated reining in speculative trading by banks while seeking to get more regular people into the banking sector.

Her critics, for example, quoted from one recent paper, which included a proposal to allow the Federal Reserve to get into the business of retail banking.

Omarova suggested the central bank could offer bank accounts to everyday Americans, which would represent a dramatic departure from the way the banking system is currently set up.

In statements of opposition to Omarova’s nomination, industry groups such as the American Bankers Association (ABA) and the Independent Community Bankers of America (ICBA) cited her research, but they were careful to avoid personal attacks against her.

But Omarova said opposition by banking advocates had led to an environment in which attacks against her became personal, including from Sen. Pat Toomey, R-Pa., who she said “was the one who first kind of came up with this whole line of questioning.”

In a fiery speech in October, Toomey attacked Omarova, saying she “clearly has an aversion to anything like free-market capitalism” while noting he had never “seen a more radical choice for any regulatory spot in our federal government.”

During his speech, Toomey suggested Omarova’s views could have been shaped by her upbringing.

“You could ask yourself, ‘Where would a person even come up with these ideas?'” he said. “Well, maybe a contributing factor could be in if a person grew up in the former Soviet Union, and went to Moscow State University, and attended there on a Vladimir Lenin Academic Scholarship.”

Omarova was born in the former Soviet Union in what is now Kazakhstan. She studied at Moscow State University before she moved to the United States in 1991, to go to graduate school.

When the Soviet Union disintegrated, Omarova decided to stay in the U.S., where she worked for a private law firm, and most recently, as an academic.

In a statement to NPR, Toomey stood by his opposition to Omarova’s nomination to head the OCC.

“During the confirmation process, a bipartisan consensus emerged that Professor Omarova’s self-proclaimed radical ideas for America’s financial system were not suitable for our nation’s top banking regulator,” Toomey said. “I hope the Biden administration will select a nominee with mainstream views about the American economy.”

Referring to her opponents generally, Omarova said that “they made a strategic decision that the best chance of defeating me was to kind of generate this … politicized backlash against me personally. In other words, demonize me personally.”

Omarova added that the attacks made her “a caricature of … this evil person, probably a spy for the Soviet Union, never you mind the fact that that country doesn’t even exist.”

“I guess that strategy paid off,” she added.

Omarova said she was particularly angry about a series of pointed questions about her upbringing from Sen. John Kennedy, R-La., during her Senate nomination hearing last month.

“I don’t mean any disrespect,” Kennedy said at the time. “I don’t know whether to call you ‘professor’ or ‘comrade.'”

“I am not a communist,” Omarova replied at the time. “I do not subscribe to that ideology. I could not choose where I was born.”

Almost a month later, Omarova remembers what was going through her head at the time.

“I was surprised by it, but I was also genuinely incensed by it,” she said. “And in that moment, I thought, ‘Okay, enough is enough.'”‘

Kennedy’s office also had not replied to NPR’s request for comment.

Yet Omarova said she was unable to express her views personally to many senators, as is usually the norm in confirmation hearings. She noted that despite making clear she was willing to meet with lawmakers as many times as needed, only one Republican senator, Sen. Cynthia Lummis, R-Wyoming, met with her.

“It was important for senators to understand what I really stood for, not to just read what bank lobbyists cheat sheets about my supposed scholarly views told them to do,” Omarova said. “The only assumption I can make is that that was their choice not to meet with me.”

Still, although the most salient criticism came from Republicans, some moderate Democrats also expressed misgivings about her candidacy, providing her with no clear path to get confirmed.

In a statement to NPR, the ICBA said it stood by its opposition to Omarova’s nomination.

Omarova: Banks had reason to be ‘worried’

Throughout her interview, Omarova defended her views on the banking sector, saying she has never advocated nationalizing private banks as she has been accused of.

Instead, she said her main objective was ensuring banks were focused on helping people and promoting the “real economy” – and not in making outsized profits from speculative trading.

“Ultimately, my positions are quite simple,” she said. “I think that our financial system needs to do better in serving the interests of regular Americans and American businesses, and the American economy and the real economy.”

And she noted that had she been confirmed, she would have pushed for increased regulation and tougher questions within the powers provided by the OCC.

“They absolutely do have reasons to be worried,” Omarova said of the banking sector.

She said regulators need to ask banks why they invest in certain assets to protect the integrity of the entire financial system.

Doing otherwise could lead to a repeat of the 2008 Global Financial Crisis that required a bailout of key banks, Omarova argued.

‘They chose to weaponize my identity’

Asked if she believes her opponents were motivated by racism or sexism, Omarova was at first reluctant to answer.

“It is very hard for me to say, you know, whether or not any individual person attacking me was driven necessarily by racist or sexist motives,” she said, adding the question puts her “in a lose-lose position.”

“I don’t want to appear as a victim in this process,” she noted. But she also added that “the attacks against me have been personalized from the start, on purpose.”

“In fact, I believe that the Wall Street lobby doesn’t really care about my race or my sex or anything like that. They would have loved me just the way I am if only I stood up for their interests,” she said.

“But they chose to weaponize my identity because that was the easiest way politically to tank my nomination. And that’s what they’ve done.”

She said the fallout had extended beyond personal attacks from senators.

“I have received a lot of hate mail personally, and a lot of that hate mail was clearly using racial slurs and all kinds of insults that I’ve never been exposed to in my life,” she said.

“So how do I feel about it personally? Can one disentangle racism, sexism and all of these other things, xenophobia from other things?” she added. “I don’t know. It’s difficult.”