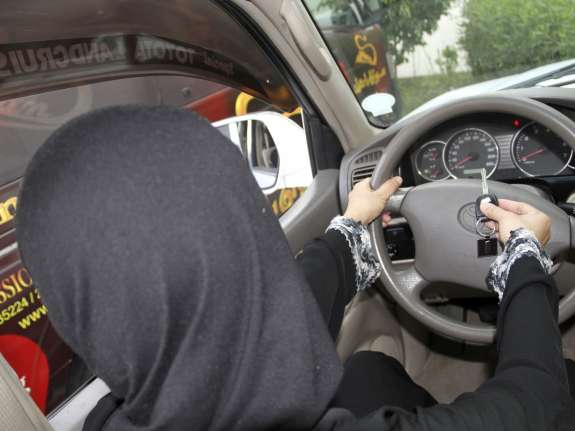 A Saudi woman poses in this picture to illustrate driving a car in Jiddah as part of a June 2011 protest. An advisory council has recommended for the first time lifting a ban on female drivers.
Image credit: Susan Baaghil

Two Saudi women arrested nearly a month ago for flouting a ban on female drivers have had their cases referred to a court established to try terrorists, according to The Associated Press.

Using driver’s licenses obtained in the United Arab Emirates, Loujain al-Hathloul, 25, and Maysa al-Amoudi, 33, were arrested after crossing into Saudi Arabia, where women are officially banned from driving. The arrests took place on Nov. 30 and Dec. 1, respectively.

The AP, citing “four people close to the case,” says that al-Hathloul and al-Amoudi were referred to Saudi Arabia’s Special Criminal Court, which was set up to try terrorism suspects but has also been used for a number of cases involving human rights workers and government critics.

Although the women were arrested for defying the ban by driving, the AP says they “were sent to the anti-terrorism court in connection to opinions they expressed in tweets and in social media.”

The arrests stem from a “drive-in” protest that began in October.

As The Two-Way’s Bill Chappell reported at the time:

“Women in Saudi Arabia are braving a ban on their ability to drive, taking to the streets … as part of a push to allow women to attain driver’s licenses. Thousands of people have signed an online petition supporting the protest, which government and religious officials have spoken out against.

“The drive-in is the third broad protest against the ban since the early 1990s. And it’s being discussed energetically on Twitter, where the hashtags #Saudi, #Oct26driving, and #Women2Drive are providing running commentary.”

The following month, a Saudi Shura Council recommended lifting the ban on female drivers, but only with a set of very specific restrictions: Women who are at least 30 would be allowed to drive in daylight hours provided they don’t wear makeup and are accompanied by their male guardian. However, local media, quoting the head of the Shura Council, later denied that any easing of the ban was under consideration.