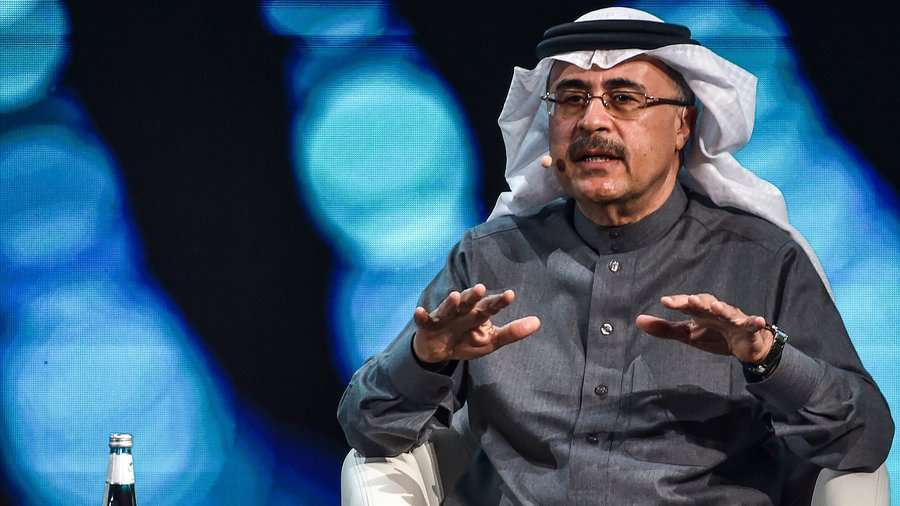 Amin Nasser, president and chief executive officer of Saudi Aramco, speaks during the fourth edition of the Future Investment Initiative (FII) conference at the capital Riyadh's Ritz-Carlton hotel on January 27, 2021. - Saudi Arabia opened a two-day Davos-style investment forum, with dozens of global policy makers and business tycoons lined up to speak at the largely virtual event amid the coronavirus pandemic. Only 200 of around 8,000 registered delegates attended in-person, while around 100 speakers are set to participate virtually with 50 present physically. Previous summits drew thousands of Wall Street titans and global policymakers. (Photo by FAYEZ NURELDINE / AFP) (Photo by FAYEZ NURELDINE/AFP via Getty Images)

Aramco, the world’s largest oil company, reported earnings of $49 billion in 2020, down from $88.2 billion in the year before. CEO Amin Nasser described last year as “one of the most challenging years in history.”

Despite the drop, Aramco said it would pay out $75 billion in annual dividends to shareholders. The company began selling shares publicly in December 2019, yet the Saudi government owns more than 98% of them, the Associated Press reports.

As with its competitors, Aramco has faced historic headwinds in the oil markets brought on by the coronavirus. Countries have limited travel and work to confront the coronavirus pandemic, sending oil prices spiraling. At one point last year, oil prices dipped below zero for the first time in history. U.S. energy company Exxon Mobil Corp. recorded its worst year in 2020, CNN Business reported.

Aramco’s earnings report comes after attacks on its facilities, including a drone strike on Friday claimed by the Iranian-backed Houthi rebel group in Yemen. The company has said the attacks did not affect business, although major assaults in 2019 hurt production and jolted oil markets.

Aramco’s 2020 numbers came in slightly below analysts’ expectations but still represents one of the highest profits of any company, according to CNBC.

“We are seeing a pick-up in demand in Asia and also positive signs elsewhere,”
Nasser said in a statement. “We remain confident that we will emerge on the other side of this pandemic in a position of strength.”