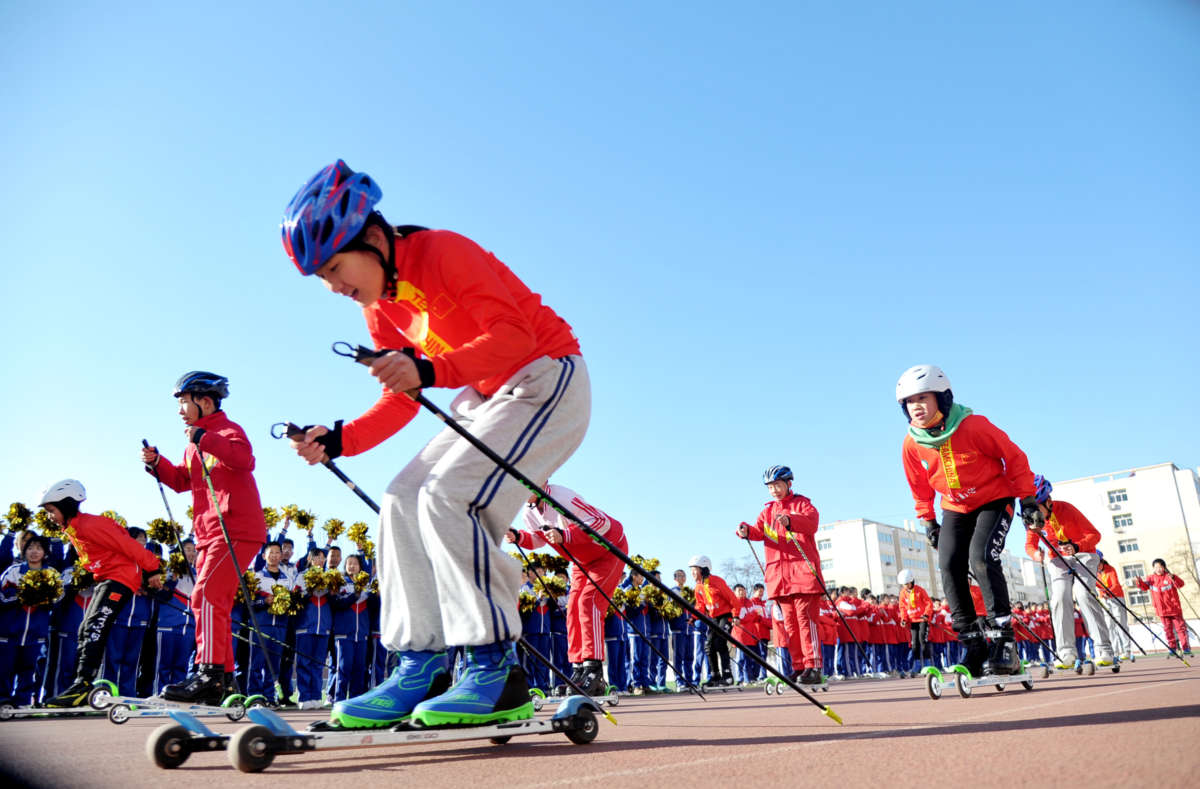 What do China, Saudi Arabia and Qatar have in common? The answer might not be as obvious as you think. But all three countries are accused of human rights violations, and all three are also playing host to some of the largest and most lucrative sporting events in the world.

But human rights organizations and others have been voicing concerns that behind this seemingly innocuous trend is a concerted effort by these and other nations to use sports as a way to cover up their poor human rights records.

“They are using and increasingly seeing sport as an opportunity to launder their image,” Felix Jakens, Amnesty International UK’s head of campaigns, told NPR.

The human rights group even uses a recent term to describe this practice: “sportswashing.”

“It’s the process whereby a country or regime with a particularly poor human rights record uses sport as a way of creating positive headlines, positive spin about their countries,” Jakens explained.

Saudi Arabia dabbles in English soccer and Formula One racing

“Ever since this deal was first talked about we said it represented a clear attempt by the Saudi authorities to sportswash their appalling human rights record with the glamour of top-flight football,” Amnesty International UK’s CEO Sacha Deshmukh said in a statement.

The Newcastle United buyout is just the latest sports-related investment by Saudi authorities. In recent years, the kingdom has spent more than $1.5 billion to stage elite sporting events, according to a report by Grant Liberty. This includes staging the annual Spanish Super Cup soccer match, international men’s and women’s golf tournaments and professional wrestling, among many others.

Next month, global racing series Formula One will host its race in Saudi Arabia for the first time. The Grand Prix event will take place on Dec. 5 at a brand-new racetrack in the port city of Jiddah. F1 — which is owned by U.S.-based Liberty Media Corp. — signed a 10-year deal with the kingdom worth a reported $650 million.

The Saudi F1 event will also feature a number of musical performances. Pop star Justin Bieber, who is headlining the off-track entertainment program, is facing growing calls to cancel his show.

In an open letter published by The Washington Post, Hatice Cengiz — the fiancée of slain Saudi journalist Jamal Khashoggi — urged the Canadian singer to “send a powerful message to the world that your name and talent will not be used to restore the reputation of a regime that kills its critics.”

The Saudi government rejects all accusations of sportswashing. Fahad Nazer, the spokesperson for the Saudi Embassy in Washington, D.C., says that those investments are part of Crown Prince Mohammed bin Salman’s plans to diversify the country’s economy, which depends heavily on oil and gas.

“The notion that the transformative reforms currently underway in the kingdom are simply an attempt to improve the kingdom’s image are widely off the mark,” Nazer told NPR.

He said that the country aims to establish a sports industry under its Vision 2030 plan, which not only calls for a more diverse economy but also a vibrant society.

But the 2018 killing of the journalist Khashoggi, the imprisonment of rights activists and the ongoing bombing campaign in Yemen cast doubt over how transformational those reforms really are.

Despite ushering in some limited newfound freedoms for Saudi citizens, the crown prince has made the country more autocratic than before, says Daniel Byman, a senior fellow at the Brookings Institution.

“There are more freedoms for women, just to pick a very important example. But there is less tolerance even of limited political dissension,” he says.

A spokesperson for Formula One, which has been accused of enabling sportswashing in the past, did not directly respond to the question of whether the series considers a country’s human rights record in its decision to host a race there.

“We take our responsibilities on rights very seriously and set high ethical standards for counterparties and those in our supply chain, which are enshrined in contracts, and we pay close attention to their adherence,” the spokesperson said.

This past weekend, F1 made its debut in Qatar — another country with a less-than-stellar track record. Seven-time world champion and race winner Lewis Hamilton raised the issue of human rights and equality in a news conference ahead of Sunday’s Grand Prix.

“As sports go to these places, they are duty-bound to raise awareness for these issues. These places need scrutiny. Equal rights is a serious issue,” said the British driver, who wore a rainbow-colored race helmet in a show of solidarity with the LGBTQ+ community.

China has also been accused of using sports to polish its public image. With the 2022 Winter Olympics only a couple of months away, the Biden administration is considering a diplomatic boycott of the Games over the Chinese government’s treatment of Uyghur Muslims living in the country’s Xinjiang region.

The issue of sportswashing has even reached the halls of Congress. Last year, Republican Sen. Rick Scott of Florida introduced a resolution calling on the International Olympic Committee to strip China of its Olympic hosting rights.

“I don’t believe a country that is committing genocide against its own citizens, that’s building a military to dominate the world, that steals jobs and technology from all over the world, denies basic rights to its own citizens should be hosting an Olympics,” Scott told NPR in a recent interview.

His Democratic colleague, Sen. Ron Wyden of Oregon, argues that sports leagues need to take more responsibility when it comes to rights issues. He says they are “selling out their integrity for profits,” effectively helping to rehabilitate the reputations of human rights abusers.

The practice of countries using sports as a smoke screen is not new. Many nations, including Great Britain, saw sports as a way to distract from oppression during colonial times. Nazi Germany used the 1936 Berlin Olympics as an opportunity to show off its alleged racial superiority and, during the Cold War, the United States and the Soviet Union used sports as a soft power.

But the word sportswashing came into use later. By one account, according to British sports journalist Sam Cunningham, the term emerged in 2015 when Azerbaijan hosted the European Games, and Amnesty International brought it back to the spotlight a few years later.

Whatever the origins, whether sportswashing can have a lasting effect remains unclear. But according to Simon Chadwick, a sports industry expert at Emlyon Business School in France, it can provide temporary relief.

“If we look at the 2018 World Cup, there was widespread criticism of Russia,” he says. “But what we saw upon people’s return from the Russian World Cup is that now their view of Russia was much changed, they saw the country in a much more positive fashion.”

With Western democracies increasingly scrutinizing the value of hosting large-scale sporting events, he believes countries with questionable human rights records will continue to use sports to boost their public image.

“What we will see is the likes of Saudi Arabia, China and others continuing to bid for these events, being awarded the rights to stage them and then leaving those in the West to deal with the kind of moral and ideological fallout that we have as a result of their hosting,” Chadwick says.

Most sports organizations defend their decision to stage events in these countries by claiming to be a catalyst for change. But that change has yet to materialize.