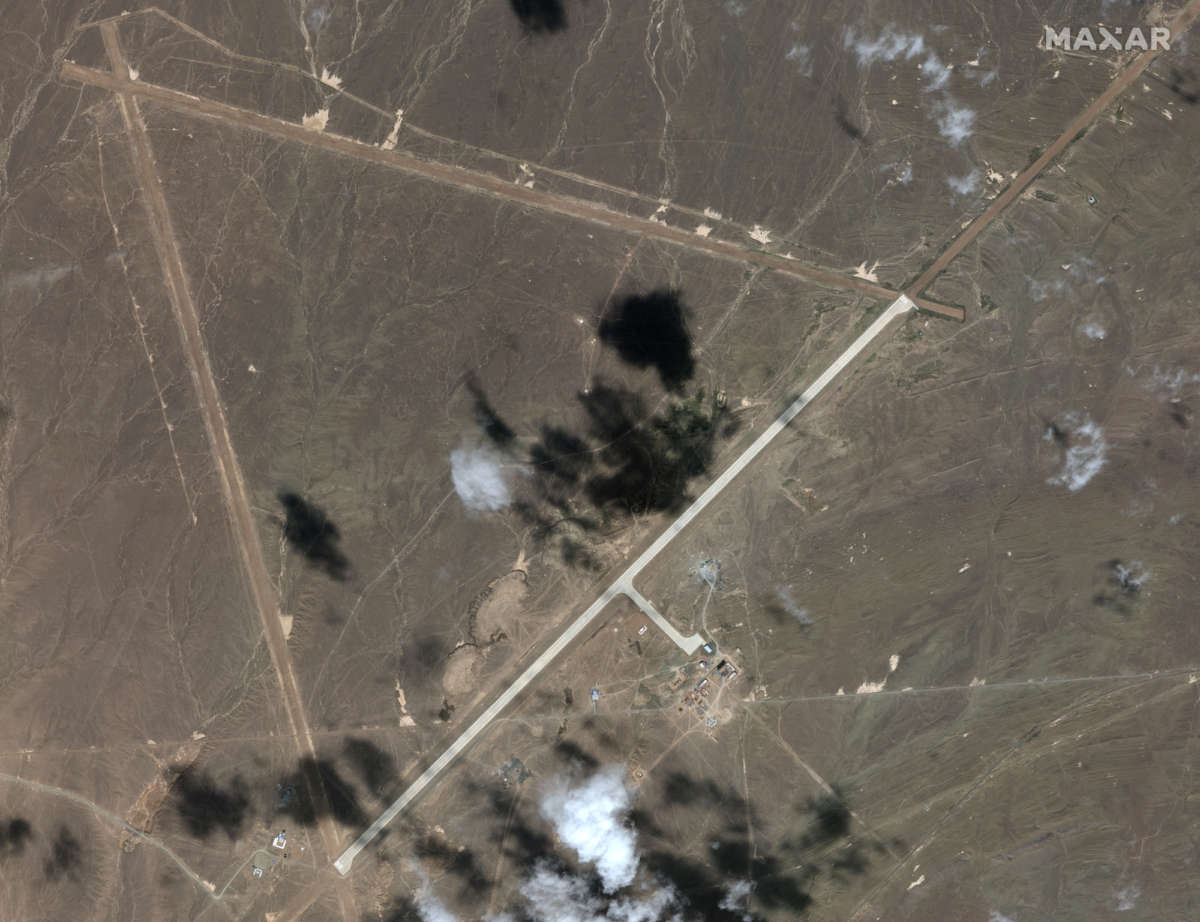 The airfield has a long runway which is believed to have been used to land China's space plane in 2020.

It inspires comparisons to Area-51: A massive, three-mile-long runway in a remote patch of Chinese desert, hundreds of miles from any cities.

Now, it looks like the site is undergoing an expansion. Satellite imagery from the commercial company Maxar supplied exclusively to NPR shows around a dozen large concrete buildings under construction near the landing strip. The buildings mark a significant change at the airfield, which up until now lacked much in the way of permanent accommodation.

“I think we’re observing what appears to be a pretty important facility for China’s military space activities that appears to be growing,” says Ankit Panda, a senior fellow at the Carnegie Endowment for International Peace who tracks space issues there.

The runway, on the edge of China’s former nuclear weapons test range at Lop Nur, sprung from nowhere in 2016. In 2020, observers believe that China landed a highly classified “space plane” there.

Nobody knows exactly what the space plane looks like, but it probably resembles the Space Shuttles that used to ferry U.S. astronauts into orbit, except smaller.

“It’s certainly not, I would say, big enough to fly people,” says Jonathan McDowell, an astronomer with the Center for Astrophysics Harvard and Smithsonian who tracks satellites and spacecraft.

America has a pair of similar space planes, says McDowell. Known as the X-37b, these spacecraft conduct classified missions for the Air Force. McDowell says he believes the X-37b program is probably used to test advanced technology for military satellites.

“It’s used as an experiment platform, as something that carries experiments into space and and then for the most part, brings them back and so that you can fix them, improve them and launch them again,” he says.

Aside from the landing of the Chinese space plane last September, the runway has been quiet. There are what look like some modular trailers at one end, perhaps temporary housing for those rare times ground crew needs to be at the site.

But the new facilities now under construction indicate the runway’s role may be expanding. “This seems to be something that is more than just, ‘We’re coming here for the weekend,'” McDowell says.

The Maxar imagery, along with images from the commercial company Planet, suggest that construction began in the summer of 2020, around the time the space plane took flight. Panda says the buildings resemble those seen at other Chinese military facilities. But it’s unclear what they’ll be used for. “This may be offices for officers, if this indeed a site that will be a permanent military installation of some sort,” he says. “Housing is another possibility.”

Regardless, Panda thinks that the giant runway in the middle of the desert may be about to get busier. Its remote location makes it the perfect spot to test top-secret gear.

The Chinese Embassy in Washington declined to comment about the site. For his part, Panda says he’ll be keeping an eye out for new technology on display in upcoming military parades. That might provide clues about what the Chinese government is working on at its new desert facility.