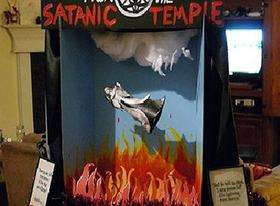 The Satanic Temple, a New York-based group that doesn’t really worship the devil, put up its crudely made diorama in the entry rotunda of Florida’s Capitol on Monday.

The falling angel diorama, which a year ago was barred from the Capitol when deemed “grossly offensive” by the Department of Management Services, is just the latest in a series of irreverent holiday displays from groups spurred by the state’s acceptance of a Christian nativity scene inside the state house the past two years.

John Porgal, a Tallahassee resident and member of the Satanic Temple, said the group threatened legal action this year if again blocked and offered not to put its display if the Florida Prayer Network and International House of Prayer Tallahassee wouldn’t put up their nativity scenes.

“We said, basically, if all of these displays go away, ours will go away as well,” said Porgal.

“If the nativity scene had never come in here in the first place, we would not have done this.”

In reaction to the glut of holiday display applications this year, the state did impose a new seven day timeline for items put up in the rotunda.

The applicant faces a 100 dollar a day fine if the display remains after its week.

The Florida Prayer Network’s nativity, which went up December 15th, was taken down on Monday.

Nearby a framed poster of the nativity by the International House of Prayer Tallahassee was put up Monday.

Both Christian groups are represented by Pam Olsen, who questioned the motives of those opposed to the nativity scene but said she supports the open forum for holiday display.

“In this country, people can spoof can’t they? Thank God, because we are not a country that says you can’t do that,” said Olsen.

“We have freedom here, and thank God that we do have that. So he can spoof all he wants, but the reality is Merry Christmas!”

Olsen noted that the opposition groups have been silent regarding the placement of the Hanukkah menorah or Christmas trees that had been displayed for years on the first floor of the Capitol.

The menorah is up this week inside the rotunda.

The Satanic Temple’s display this year joined entries from the American Atheists of Tallahassee, the Freedom From Religion Foundation, the Church of the Flying Spaghetti Monster, and a South Florida political blogger who for the second year put up a 6-foot stack of empty beer cans to represent Festivus, a non-commercial festival “for the rest of us” based on the television sitcom Seinfeld.