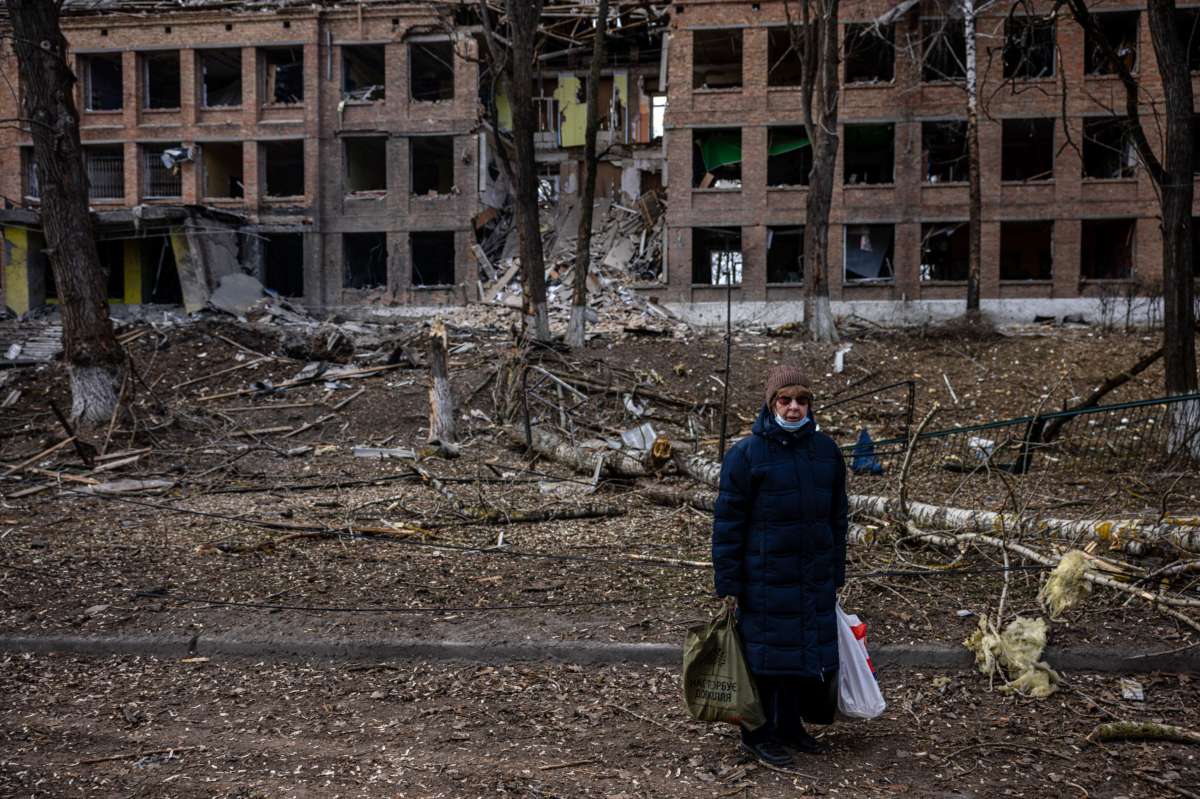 A woman stands in front of a destroyed building after a Russian missile attack in the town of Vasylkiv, near Kyiv, on Sunday. Russian forces faced stiff resistance over the weekend and faced logistics problems in their invasion plans.
Image credit: Dimitar Dilkoff

Ukrainian officials arrived at the Belarussian border on Monday to potentially negotiate a cease-fire with a delegation from Russia. Hopes for the meeting remained low, as Ukrainian President Volodymyr Zelenskyy has warned he expects little progress from the talks. They had been delayed by disputes over where to meet.

The meeting kicked off as the Russian bombardment continued into Monday. Russian forces faced stiff resistance from Ukrainians, with Russian forces suffering from logistical problems, according to analysts and the U.S. military.

“They have not achieved what they intended on day four” of the invasion, a senior U.S. defense official told reporters on Sunday, with Ukrainians still in control of all major cities.

However, the situation could quickly change as Russia had only committed about two-thirds of its 150,000 to 190,000 service members who had been stationed around Ukraine as of Sunday, according to the U.S.

In a speech, Zelenskyy accused Russia of intentionally targeting civilians and called for an international tribunal to investigate.

“Since the first hours of the invasion, Russian troops have been hitting civilian infrastructure. They consciously chose tactics to destroy people and everything that makes life just normal,” Zelenskyy said on Sunday.

Ukraine’s interior ministry said at least 352 Ukrainian civilians had been killed, including 14 children, and another 1,684 people have been wounded. Russia has said some of its military members have been killed but has not released numbers, The Associated Press reported.

In New York, the United Nations is set to convene an emergency session of its General Assembly on Monday for only the 11th time in more than 70 years. The emergency session allows all 193 members to debate and vote on a resolution calling for Russia’s immediate withdrawal of troops from Ukraine.

And in Russia, President Vladimir Putin ordered what Russia calls its “deterrent forces” on alert, which includes nuclear weapons.

The ruble dropped nearly 30% Monday after Western countries imposed new restrictions on the Russian financial sector. One ruble was trading at about 105 to the dollar early Monday morning — down from 84 to one on Friday. The trading value Monday put one ruble at less than $0.01.

The United States, Canada, France, Germany, Italy, the U.K. and the EU Commission vowed on Saturday to impose “restrictive measures that will prevent the Russian Central Bank from deploying its reserves” to undermine the effect of the sanctions. Russia has about $630 billion of foreign reserves, but the sanctions could prevent it from accessing its overseas assets to prop up the tanking currency.

The Russian Central Bank on Monday increased a key interest rate to attract investors in the ruble. In a statement, the bank’s board of directors said “external conditions for the Russian economy have drastically changed.” It more than doubled the rate from 9.5% to 20%.

“The increase of the key rate will ensure a rise in deposit rates to levels needed to compensate for the increased depreciation and inflation risks,” the statement says. “This is needed to support financial and price stability and protect the savings of citizens from depreciation.” The bank’s governor is set to address the benchmark increase Monday afternoon in Moscow.

About 11,000 banks use the Society for Worldwide Interbank Financial Communications, sending tens of millions of messages to one another each day. The countries imposing the sanctions have not yet said which Russian banks will be prohibited from accessing the platform.

Some analysts called selecting specific banks for removal a more targeted punishment than the sanctions on the central bank, which affect the Russian population.

Removing certain institutions from SWIFT will have “maximum impact on Russia while preventing too much impact – negative impact – on European countries like Germany, which has historically very strong ties with Russia in terms of business, investments and, of course, reliance on Russian gas,” Scheherazade Rehman, professor of international finance at George Washington University told All Things Considered.

Despite the sanctions and Russian response, markets in Asia ended slightly higher. London’s FTSE 100 was down about 1% in early morning trading. Futures markets in the United States were mixed, with the Dow Jones set to open in the red, and the Nasdaq and S&P 500 pointing upward.

Energy prices remained high. Oil, which surpassed $100 last week for the first time since 2014, was trading near that mark early on Monday. The benchmark West Texas Intermediate was trading at $95.26 per barrel. Natural gas prices were up nearly three percent as well.

The European Union bans Russian flights and will send weapons

EU Commission President Ursula von der Leyen said on Sunday that Russian-owned, Russian-registered and Russian-controlled aircraft would not be allowed in EU airspace.

“These aircraft will no more be able to land in, take off or overly the territory of the EU,” von der Leyen said in a statement.

She also said the EU would “finance the purchase and delivery of weapons and other equipment” to Ukraine, while Germany, Denmark and Sweden over the weekend said they would send weapons and equipment to Ukraine.

The commission also announced new sanctions on President Alexander Lukashenko’s regime in Belarus, which is a key ally of Russia.

Protesters across the world stand with Ukraine

From Prague to New York City, Tel Aviv to Tokyo, Buenos Aires to Pretoria, protesters gathered over the weekend to show their support for Ukraine and to condemn Russian President Vladimir Putin.

Some 100,000 people gathered in Berlin on Sunday in front of the city’s Brandenburg Gate.

In Russia itself, protesters risked arrest by gathering to voice their opposition to the invasion.

Over 5,900 people in Russia have been detained over four days, according to the human rights monitoring group OVD-Info.

Women and children flee the war

Adult men under 60 have been banned from leaving the country after Zelenskyy declared martial law and instituted a mandatory military conscription.

So at border crossings, long lines of women, children and the elderly are waiting to escape Russia’s attacks. At the Medyka border crossing into Poland, a trickle of people came through while tens of thousands were backed up behind them on the Ukrainian side of the border.

As of Sunday, at least 368,000 refugees had crossed into Poland, Hungary, Romania, Moldova and other countries, according to Filippo Grandi, the U.N. high commissioner for refugees.

Meanwhile, Ukrainian men who had been living abroad stood in line to return to fight for their country.