Sam Becomes A Hurricane and Expected To Rapidly Intensify Over Weekend 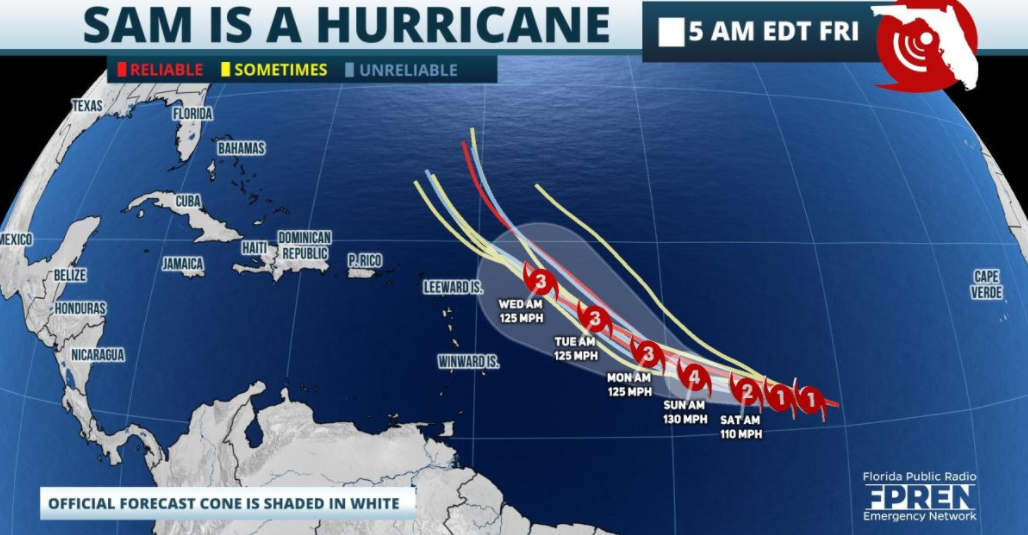 Sam rapidly intensified into a hurricane Friday morning and is forecast to become a major hurricane over the weekend. While long range forecast data suggests Sam will stay out to sea, it is still too soon to credibly predict whether Sam will impact Florida or the United States.

Satellite data estimates maximum winds from Hurricane Sam were at 75 mph and the storm was moving west at 15 mph. Sam’s circulation was noted as being “compact” and located 1470 miles east of the northern Leeward Islands. Sam is explicitly forecast by the National Hurricane Center (NHC) to continue rapidly intensifying and become a category three storm by Saturday afternoon.

Hurricane Sam is likely to continue on a west-northwest motion through the weekend, then gradually turn more northerly early next week. There is high confidence in both the track and intensity forecast with Sam through Tuesday. Thereafter, long range model simulations diverge considerably on how far west of north Sam might move before the steering currents allow it to recurve to the north or northeast (away from the Southeast). For this reason, residents along the East Coast from Florida to New England are encouraged to stay informed on Hurricane Sam through the weekend and early next week.

Elsewhere in the tropics, there were there additional areas of interest being monitored for possible development Friday morning: A disturbance near Bermuda, the remnants of Odette in the north Atlantic, and a new tropical wave emerging from west Africa. Probabilities of development with all three systems were noted by the NHC to be less than 50 percent, and none of them are likely to be a threat to the United States.