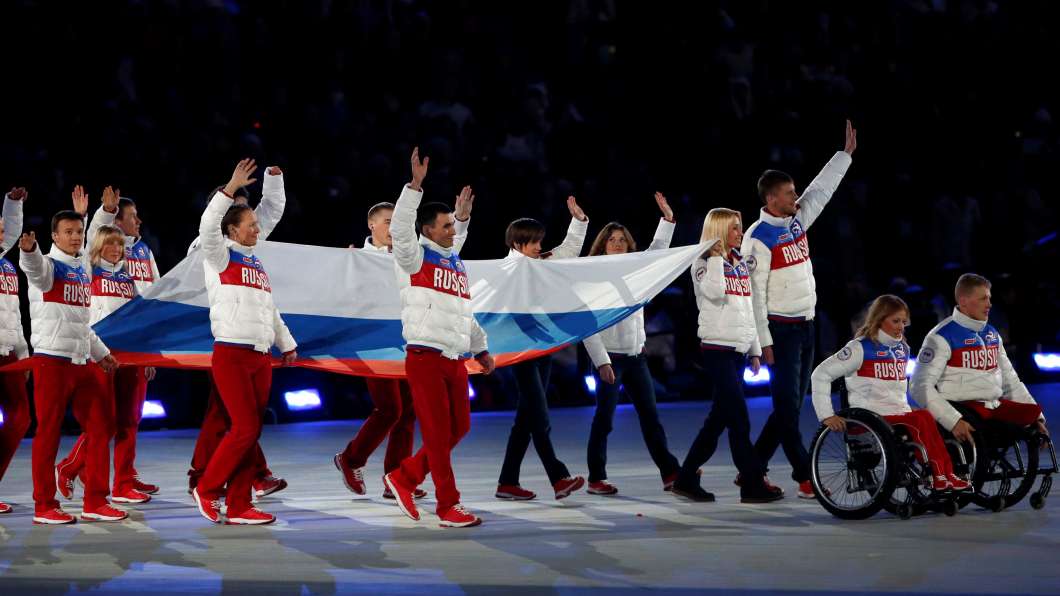 Russia's Paralympic athletes who compete in South Korea will do so under a neutral flag, part of the team's punishment for doping infractions. Here, Russian athletes are seen in the closing ceremony of the 2014 Paralympic Winter Games in Sochi, where the Russian team dominated.
Image credit: Alexander Demianchuk

The International Paralympic Committee won’t allow Russia to compete in the upcoming PyeongChang 2018 Paralympic Winter Games, maintaining a ban that punished a widespread system of doping. Citing anti-doping reforms, the committee said some Russian athletes will be able to compete in a handful of sports — but they’ll do so under a neutral flag, as their national committee remains suspended.

IPC President Andrew Parsons said that the move to allow “eligible neutral Para athletes to compete at PyeongChang 2018” was made in response to progress in Russia since it was hit with a total ban before the Rio Summer Games in 2016.

“In the summer of 2016 the anti-doping system in Russia was found to be totally compromised, corrupted and open to abuse. This made it impossible to determine which Russian Para athletes were clean and which were not,” Parsons said.

In winter of 2018, there is “a different picture in Russia,” Parsons said. Citing progress such as testing, training and other anti-doping efforts — and requiring Russian Paralympians to pass additional scrutiny to compete in South Korea — Parsons said that the IPC’s decision is “proportionate to what is in front of us.”

The decision will make the upcoming Paralympic Games, which start on March 8, look very different from the 2014 version. Hosting those games in Sochi, Russia led all nations with 80 Paralympic medals, 30 of them gold. No other country won more than 25 medals, of any type.

In many ways, the IPC’s decision, made over the weekend and announced on Monday morning, mirrors the International Olympic Committee’s handling of Russia, where a system of cheating and masking athletes’ use of performance-enhancing drugs has been detailed by independent investigations.

When the Winter Olympics begin in early February, Russia will be sending a reduced team of 169 athletes who will compete under a neutral flag and a generic label: “Olympic Athlete from Russia.”