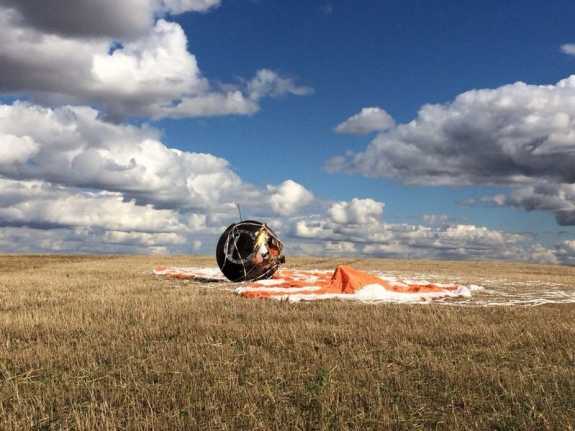 A Russian capsule that housed a gecko space-sex experiment. The geckos all died.

Space is a dangerous place. That message resonated again on Monday, when the Russian Federal Space Agency — Roscosmos — announced that a team of experimental geckos tasked with copulating while in orbit did not survive their journey.

“All geckos, unfortunately, died,” the space agency said in a terse statement.

Roscosmos is launching an investigation into the exact circumstances surrounding the geckos’ deaths, but the mission seemed star-crossed from the start.

On July 19, the Foton-M4 satellite lifted off from the Baikonur Cosmodrome in Kazakhstan. Onboard were several experiments from the Institute of Biomedical Problems designed to study life in space.

The star experiment was “Gecko-F4,” which according to a Google translation of the agency’s website was designed to “create conditions for sexual behavior, copulation and reproduction of geckos in the orbital experiment.” Video cameras were set up to capture the geckos in the act, along with any eggs that resulted.

But shortly after launch, ground control said the Foton-M4 stopped responding to commands. Controllers spent several days battling to reconnect with the spacecraft. During that time the status of the geckos, and their sexual activity, remained unclear. Nor was it clear whether the Foton-M spacecraft was capable of safely returning to Earth. The scenario was a little like the ill-fated flight of Apollo 13 in 1970 (except in most respects it was completely different).

Eventually contact was re-established with the spacecraft, and it did travel back to Earth. But the geckos appear to have died somewhere along the way. Ria Novosti quotes the head of the experiment, Sergei Savelyev, as saying the geckos very likely died just two days before landing. It appears that part of the capsule’s life-support system had quit working.

Not all life aboard perished, however. Roscosmos reports that some fruit flies appeared to have survived the journey. What’s more, they successfully reproduced.