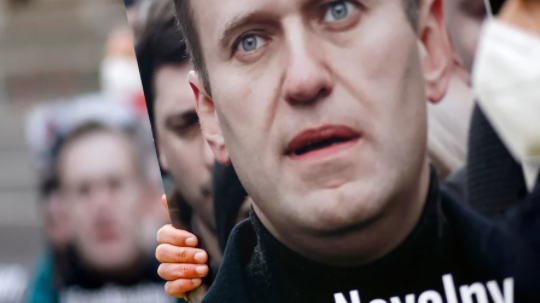 Activists from Amnesty International demonstrate outside the Russian embassy in Berlin, on Saturday, calling for the release of Kremlin critic Alexei Navalny. In Moscow on Monday, a court ordered the temporary suspension of Navalny's political network.
Image credit: Odd Andersen

The political network of jailed Russian opposition leader Alexei Navalny has been ordered to suspend its activities pending a court ruling on whether to label it and other affiliated organizations “extremist” — a move that would likely result in them being permanently shuttered.

In a hearing on Monday, prosecutors asked the Moscow City Court to stop the groups from organizing protests or publishing anything online, said Leonid Volkov, a Navalny associate.

Russian authorities accuse the organizations of posing a threat to Russia’s “constitutional order.” By labeling them as “extremist,” the government would put Navalny’s political network in the same league as radical groups such as the Islamic State.

Prosecutors are seeking to shut down not only Navalny’s Anti-Corruption Foundation, or FBK, but the Navalny Headquarters, a network of regional offices across Russia, and another Navalny-linked group, the Citizens’ Rights Protection Organization. Such a move would effectively end any meaningful political opposition in Russia ahead of September parliamentary elections.

Navalny’s office in Moscow said on its Telegram channel that it will “no longer be able to work” as usual as a result of the decision. “It would be too dangerous for our employees and for our supporters,” it said.

Ivan Zhdanov, the director of Navalny’s Anti-Corruption Foundation said in a tweet that the organization would also be affected by the ruling, adding that the move signaled that authorities are “afraid” of the group’s work.

The hearings — held behind closed doors because details are classified — were being used as “a pretext for political repression,” said attorney Ivan Pavlov, whose legal team is representing the organizations in court.

The FBK, founded in 2011 by Navalny, has been highly critical of key Russian figures, including President Vladimir Putin. Meanwhile, Navalny himself has become a key political figure and one of the few prominent voices openly opposed to Putin.

In January, Navalny’s team released a YouTube video detailing an investigation into what it says is a lavish Black Sea palace built for Putin with funds from a “slush fund.” The video has been viewed tens of millions of times. The Kremlin has dismissed the investigation as “pure nonsense.”

Navalny built a network of offices across Russia before presidential elections in 2018, which he was later barred from running in.

While traveling last August, Navalny suddenly fell ill and was hospitalized in Germany, where doctors determined that he had been poisoned with a Soviet-era, military grade nerve agent. Navalny blamed Putin for ordering the attack, but the Kremlin has denied any involvement.

After months of treatment and recovery, Navalny returned to Russia in January, only to be promptly jailed. He was later sentenced to three and a half years in a penal colony on old fraud charges that he says are politically motivated.

The U.S. and European Union have sanctioned Russian individuals and government entities over Navalny’s treatment, with the EU calling his arrest, prosecution and sentencing “arbitrary.”

In a statement last month, when the U.S. sanctions were announced, Secretary of State Antony Blinken said they were aimed at sending “a clear signal that Russia’s use of chemical weapons and abuse of human rights have severe consequences.”

Just last week, Navalny ended a more than three-week hunger strike to protest his lack of medical treatment for leg and back pain while in prison.

“Tens of thousands of peaceful activists and the staff of Aleksei Navalny’s organizations are in grave danger – if their organizations are deemed ‘extremist’ they will be at imminent risk of criminal prosecution,” Amnesty said.

NPR’s Lucian Kim in Moscow contributed to this report.