Russia, Ukraine Distance Themselves From News Of A Cease-Fire Deal 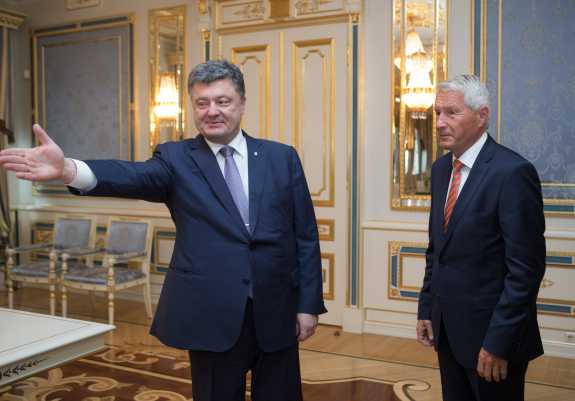 The morning started on a hopeful note: The office of Ukrainian President Petro Poroshenko said that in a phone call with Russian President Vladimir Putin the two had agreed on a “permanent cease-fire.”

But that was short-lived. As the state-funded Russia Today reports, the Russians quickly pointed out that they had reached no such agreement, because “Russia is not party to Ukraine conflict.”

The Russian news agency RIA Novosti reports that a rebel leader in eastern Ukraine also rejected news of a cease-fire.

“This is some sort of a game by Kiev,” an aide to Andrei Purgin, the self proclaimed prime minister of the Donetsk People’s Republic, told the news service. “This was completely unexpected. This decision was made without us.”

As Reuters reads the confusing tea leaves, the “statements appeared to indicate a degree of progress that could influence European Union leaders as they consider introducing new sanctions against Russia as early as Friday.”

“In a contradictory signal, Moscow simultaneously announced plans for huge military exercises this month by the strategic rocket forces responsible for its long-range nuclear weapons. It said the maneuvers in south-central Russia would involve 4,000 troops and extensive use of air power.

“The timing was clearly calculated to throw down a challenge to NATO and the United States, hours before President Barack Obama was due to deliver a speech on the crisis in Russia’s neighbor Estonia.

“Russia is a terrorist state, it is an aggressor state and will bear responsibility under international law,” Yatsenyuk said, according to Reuters.

Russia has always denied that it is taking direct action in Ukraine. The U.S., NATO and Ukraine have said more than 1,000 Russian troops are directly involved in the fight.