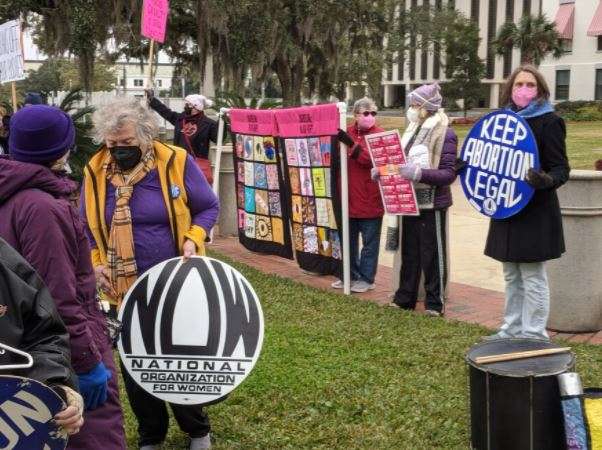 Demonstrators gathered in front of the Historic Capitol to show their support for the 1973 U.S. Supreme Court decision. (Tom Flanigan/WFSU)

The 49th anniversary of the Roe v Wade Supreme Court decision on abortion was marked across the country over the weekend. One of those observances took place in front of the Historic Florida Capitol.

An imprompteau percussion ensemble provided a cheerful soundtrack as a few dozen demonstrators waved signs at passing vehicles.
But the future for the landmark court ruling is anything but certain. Barbara DeVane with the National Organization for Women noted the committee approval just days before of a Florida House bill banning abortion after fifteen weeks of pregnancy.

“Everything that comes out of their mouth has the word ‘free’ or ‘freedom’ in it. But there is no freedom for womens’ reproductive rights if they pass this restrictive bill that has already passed one House committee this week.”

The measure has yet to get a hearing in the Florida Senate, where it would face two committees.