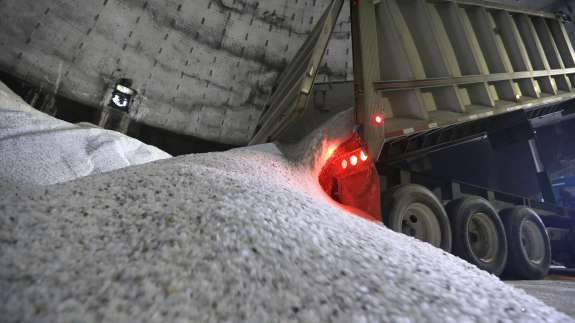 This is the time of year when it’s not uncommon to see big trucks barreling down highways and streets spreading road salt.

Steve Corsi, a hydrologist with the U.S. Geological Survey, says that translates into high levels of chloride concentrations for rivers like the Milwaukee in Wisconsin or 18 other streams near urban areas in Illinois, Ohio, Colorado and several other states.

“At many of the streams, concentrations have now exceeded those that are harmful to aquatic life,” he says.

Corsi says that’s especially true during the winter. He and other scientists analyzed chloride levels dating back to 1960 but primarily from the 1990s to 2011. The number of times they found toxic levels of chloride doubled over the two decades.

Even so, there’s growing awareness that the coarse mix of sodium chloride and other chemicals, that make driving and walking a little easier, may also cause harm.

Laura Fay, a research scientist at the Western Transportation Institute, says with that realization has come some change.

Keeping highways clear in the U.S. can cost as much as $2.3 billion a year. So Fay says government agencies that handle road crews are trying different approaches to clearing roads like adding liquid to road salt to make sure it stays in place.

Or she says, “Apply the minimum amount of product necessary to deice or anti-ice the roads.”

Which may end up helping to reduce the levels of chloride in U.S. streams.