Riding With ICE: ‘We’re Trying To Do The Right Thing’ 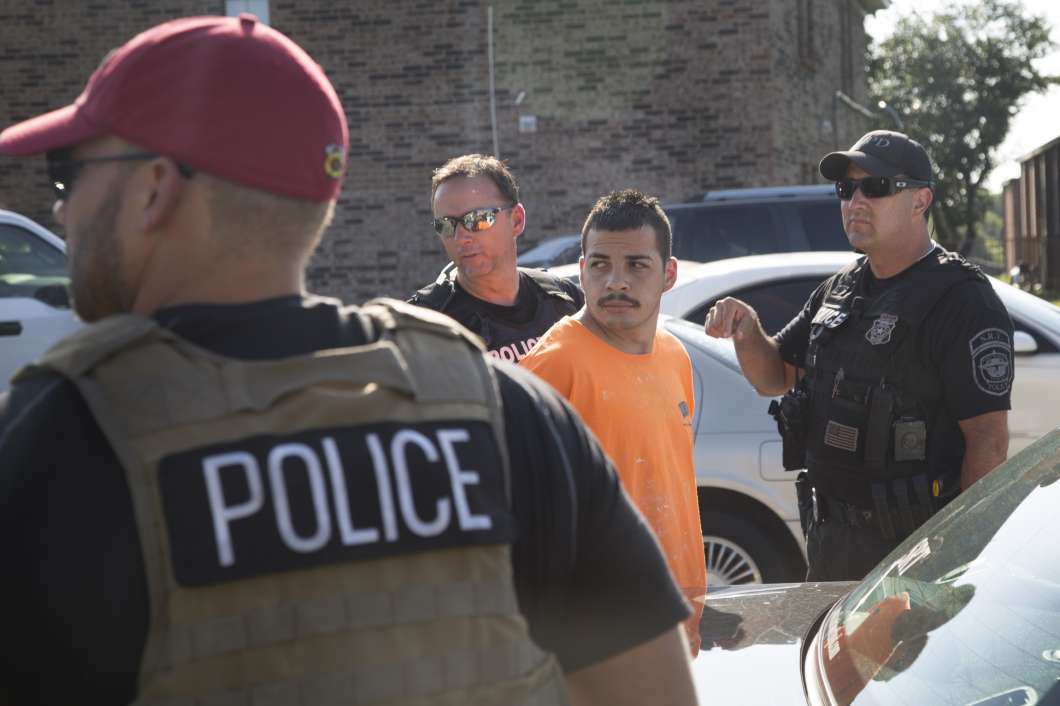 On a recent morning in Texas, Fort Worth police arrested a man who threatened to burn down his girlfriend’s apartment. The officers also detained two Mexican nationals at the apartment complex because they suspected they’re in the country illegally.

Under President Obama, Immigration and Customs Enforcement would not have bothered with either of these immigrants. During the previous administration, ICE agents primarily targeted more serious felons and recent arrivals.

“We would have had to let them go because they did not meet our enforcement priorities at the time,” said Chuck Winner, the supervisory detention and deportation officer at the scene.

Asked if that would have been frustrating, he said: “Very.”

Under President Trump, ICE agents are told to arrest anyone in the country illegally. Since Trump’s executive order in January, calling for more aggressive enforcement of immigration laws, ICE arrests have skyrocketed and the agency plans to hire more agents.

Immigrants without legal status “should be afraid,” according to Thomas Homan, the federal agency’s acting director.

But that tougher stance has put the agency on the hot seat. Immigrant advocates say ICE agents are fearmongering and arresting people who only broke the law to come to the U.S. for a better life. The agents say they’re misunderstood and that they simply want to enforce the law.

“We’re not apologizing for what we’re doing,” said Simona Flores, director of the Dallas ICE field office. “We’re trying to do the right thing.”

ICE’s Dallas operation, which covers nearly half of Texas and all of Oklahoma, is the busiest in nation. In the first four months of 2017, arrests of all unauthorized immigrants nearly doubled to 4,969 compared to 2,586 in the same period last year. Most had criminal records, and many have been deported.

At the same time, ICE arrests of non-criminals have increased dramatically. In Dallas, those arrests more than tripled, from 249 to more than 814.

At the parking lot in Fort Worth, Agent Delfino Saldaña questioned one of the men, a 21-year-old house painter from Guanajuato, Mexico with gang tattoos and facial piercings, and then handcuffed him.

“We’re going to go ahead and take him into custody, put him in the vehicle,” Saldaña said.

Saldaña said the painter was a confirmed gang member when he was younger. Agent King Cross used an encrypted cellphone app to run the man’s fingerprints.

“He’s got no criminal history in the U.S., no prior immigration contact,” Cross said.

The painter falls into the non-criminal category. The violation for which he will be deported is crossing the border illegally two years ago. Agents ran a record check on the other immigrant and found out that he has been charged several times for re-entering the country after deportation.

“In days past, if we encountered someone in the house who is not a priority, we would let that person walk,” supervisory officer Winner said as he drove a white, government-issue Expedition back to Dallas after the bust. Like many agents, he served in the military and the Border Patrol.

“Now if we encounter someone in the house that is illegally in the country, in violation of the law, we will go ahead and arrest that person.”

Flores is riding in the back seat. “I would say that the morale has gone up. There is a sense of, ‘Ok, I don’t need my boss’s permission for every decision I make,'” she said.

Under the new enforcement guidelines, ICE operations have stoked outrage. In March, agents apprehended 26 unauthorized immigrants reporting for court-ordered community service in Fort Worth. Some observers thought the roundup was mean-spirited. Flores said the immigrants had drunk driving and drug convictions, and they were deportable.

Immigrant advocates say the dragnet is cast too wide. They say immigrants who pose no threat to the community are being swept up, along with dangerous criminals.

Immigration and Customs Enforcement “is really instilling this sense of fear within our community. And I think that has disastrous effects,” said Michelle Garza Pareja, the Dallas-based associate executive director of RAICES, immigrant rights group.

Flores said that over her nearly 30-year career as a federal immigration officer, she always has used discretion. Agents might not detain a single mother, for example, if she’s the sole provider for her children. Flores said her decisions are informed by her own difficult upbringing in San Antonio.

“I know what poverty is like. I know what hunger is like,” she said, wiping away tears. “I know what physical abuse is like in the household. But I also know what love is like. And I know that personally, professionally, I want this world to be a better place.”

She added: “We listen to every case by case when it’s brought to our attention that might need special attention.”

NPR embedded with Fugitive Operations for two days in early July. In that time, agents spent most of their time sitting in unmarked SUVs parked in working-class Hispanic neighborhoods, drinking coffee and watching houses.

In years past, ICE agents used to knock on doors and ask their targets to come out.

“Lately they don’t even open the door for us,” Winner said.

Today, immigrant communities are savvier. They spread the word on social media: If an ICE agent knocks, even if he or she has a warrant, don’t open the door.

“Now we end up having to sit and do surveillance a lot more, so it definitely makes it a little bit tougher,” Winner said.

The officers of Fugitive Operations, a component of ICE Enforcement and Removal Operations, insist they do not do random, indiscriminate sweeps; they only go after specific targets.

“We have a lead on someone that’s in the country illegally or is a criminal alien who’s been convicted of a crime and is in this country, we target that person for arrest. We don’t go set up checkpoints on the highway. We don’t do mass raids at employers, we don’t do that,” deportation officer Gerry Hutt said.

On NPR’s two-day ride-along, the team selected eight targets. They included a Mexican found guilty of driving while intoxicated, a Salvadoran who had been deported three times before, a Bangladeshi mortgage broker convicted of a sex crime, and Antonio Jimenez.

“I know I had felonies, and I know that it [deportation] could happen,” Jimenez said, sitting disconsolately on a metal bench in an ICE processing room. He has convictions for burglary and heroin possession, and was wanted for parole violations. This means he also would have been a target under Obama’s ICE.

The heavyset, whiskered 21-year-old was brought to this country illegally by his parents from San Luis Potosi, Mexico, when he was an infant. A couple of hours earlier, ICE had cuffed him and led him out of his house in the Dallas suburb of Mesquite as he told his wife and 15-month-old son goodbye.

But he doesn’t blame the agents.

“No, they did their job,” Jimenez said. “They weren’t mean, they weren’t rude or nothin’. Why would I get mad at them?”

When his deportation case is complete, agents will escort Antonio Jimenez to the middle of the international bridge in Laredo, and he will walk to Nuevo Laredo, Mexico, to start his new life.