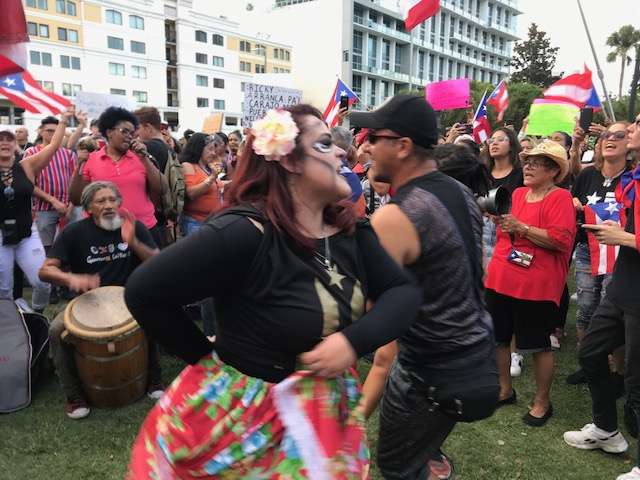 The protesters chanted, “Ricky Renuncia” or “Ricky Resign.” They also danced and sang along with traditional bomba and plena music.

Yaletza Peralta is an Osceola County teacher. She led the dancing dressed in a traditional outfit. She said she left Puerto Rico for Orlando after Hurricane Maria.

Even though the reason they were protesting was serious-the tone of the event was resilient even joyful.

“But in this case instead of us crying even though all of us here do feel the pain. We don’t go to violence per se. We sing. We dance. We cry but of joy because we’re here and we love where we’re from.”

Ileana Guzman was wrapped in a Puerto Rican flag. She said the protest was the first one she’d ever attended.

She said after Hurricane Maria she couldn’t reach her parents for two weeks and believes corruption led to the mismanaged response to the disaster.

“We have a saying that Puerto Ricans have this feeling of being the underdog. For many years they didn’t really react to the horrible things that were being done by the government. I don’t know if you saw the pictures today. I don’t think I’ve ever seen anything like that in my life. So it’s quite shocking to the system. It’s very emotional. And it makes my heart jump with joy.”

Rosselló says he will remain in office despite texts exchanged with Cabinet members mocking victims of the hurricane and other minorities like women and LGBTQ people.

The event coincided with a daylong demonstration on the island.