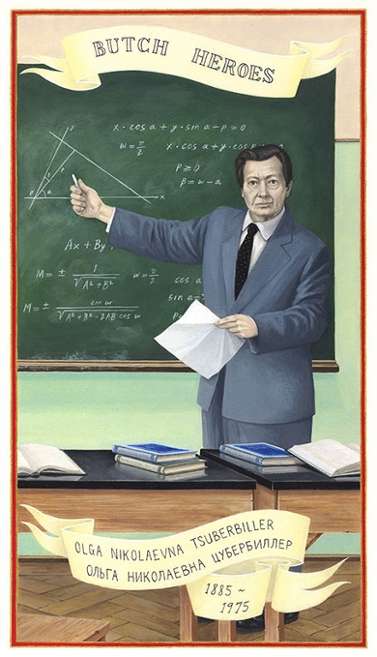 Widespread acceptance of, or at least acquaintance with, nonbinary sexuality has arrived with almost whip-crack speed. Not to belittle the struggle that still exists, but five years ago, the idea that most of Middle America would watch a TV show starring a former Olympic men’s track and field champ now living her truth as a Beverly Hills divorcee would have been unthinkable.

For some, the freedom to create one’s identity from scratch is both exhilarating and terrifying. For trans artist Ria Brodell, it’s a process of imagination underpinned with rigorous research.

In Brodell’s show Devotion at the Cornell Fine Arts Museum in Winter Park, a series of portraits dubbed Butch Heroes uses the format of Catholic holy cards to represent transgender individuals from the past. Brodell’s subjects include a Russian mathematics professor, a Native American chief, and an 18th-century couple who lived as “man” and wife in rural England for 39 years.

Brodell pores through historical documents, photographs and correspondence to find individuals from diverse ethnic, societal and geographic backgrounds. The artist says, “Many of these individuals have been heterosexualized, criminalized or their stories were intentionally censored in an effort to hide their queer identity.”

Brodell’s portraits bring forth lost history and honor their subjects’ self-representations, appropriating the conventions of traditional religious art to celebrate devotion in all its forms.

Ria Brodell will discuss Butch Heroes in a gallery talk at the Cornell at 5 p.m. Tuesday, March 20.