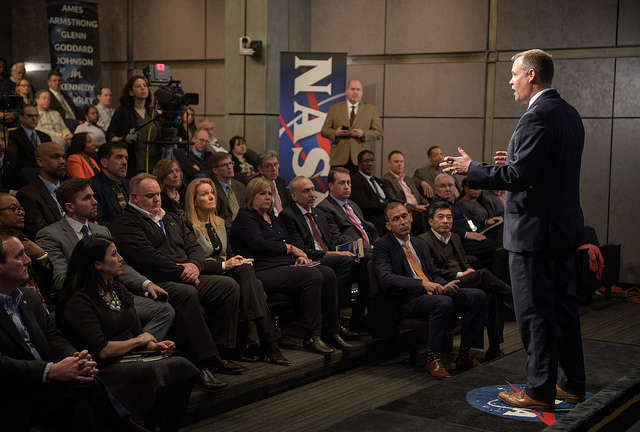 Civil servants at NASA’s Kennedy Space Center will receive retroactive pay this week after a 35-day shutdown but the fate of the thousands of center contractors who went without pay is unclear.

NASA Administrator Jim Bridenstine fielded questions from employees across the country at a town hall Tuesday, addressing the nearly 90 percent workforce shortage due to the partial government shutdown.

He’s calling for the standardization of future contracts within the agency to prevent economic uncertainty in the case of a future shutdown. “Every contract is different and so we’re working through that right now. In the future, we’d like to standardize that more, but we’re working with what we have right now.”

Congressman Bill Posey, who was a former contract worker during the Apollo program at KSC, sent a letter to appropriations committee earlier this month calling for equitable treatment of all contract employees as lawmakers draft appropriations bills. Posey’s office estimates nearly 11,000 of KSC’s 13,000 person workforce is employed as a contractor.

Bills filed  by Democrats in the House and Senate aim to provide lost wages up to $1,400 per week to federal contractors who were impacted by the partial government shutdown.

In a statement, Florida’s Republican Senator Rick Scott’s office said there was no reason for the government to shutdown and that Scott is committed to making changes for Florida families. A spokesperson for the Senator said he will “review any legislation put in front of him to right the wrongs caused by Washington’s dysfunction.” Republican Senator Marco Rubio could not be reached for comment.