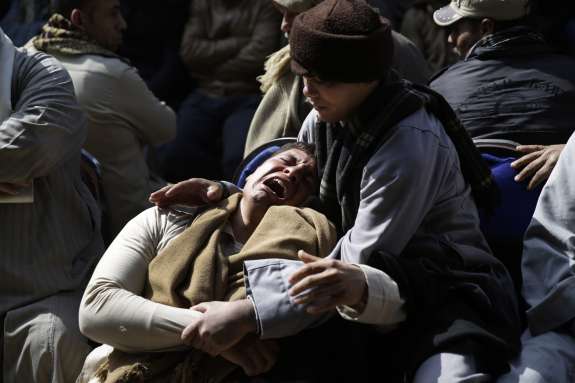 A man mourns for the Egyptian Coptic Christians captured in Libya and believed killed by militants affiliated with the Islamic State group, outside of the Virgin Mary church in the village of el-Aour, south of Cairo, Egypt, on Monday.
Image credit: Hassan Ammar

Retaliating for the mass killing of 21 of its Christian citizens, Egypt launched air strikes against the self-declared Islamic State in Libya.

“‘Your armed forces on Monday carried out focused air strikes in Libya against Daesh camps, places of gathering and training, and weapons depots,’ the military said in a statement, using the Arabic acronym for ISIS.

“It was the first time Egypt confirmed launching air strikes against the group in neighboring Libya, suggesting President Abdel Fattah al-Sisi is ready to escalate his battle against militants seeking to topple his government.

“The military said the dawn strike, in which Libya’s air force also participated, ‘achieved its targets accurately’ and the pilots returned to base safely, the Egyptian military said, as state television ran brief footage of a fighter plane taking off in darkness.”

Yesterday, the Sunni militants released a video that purported to show the beheading of 21 Egyptians. ISIS had previously released photos of the Coptic Christians that it kidnapped last week. Egypt had offered to evacuate thousands of its citizens in Libya.

The Guardian reports that a spokesman for the Egyptian Armed Forces General Command said the strikes in Libya were “to avenge the bloodshed and to seek retribution from the killers.”

“Let those far and near know that Egyptians have a shield that protects them,” the statement continued.