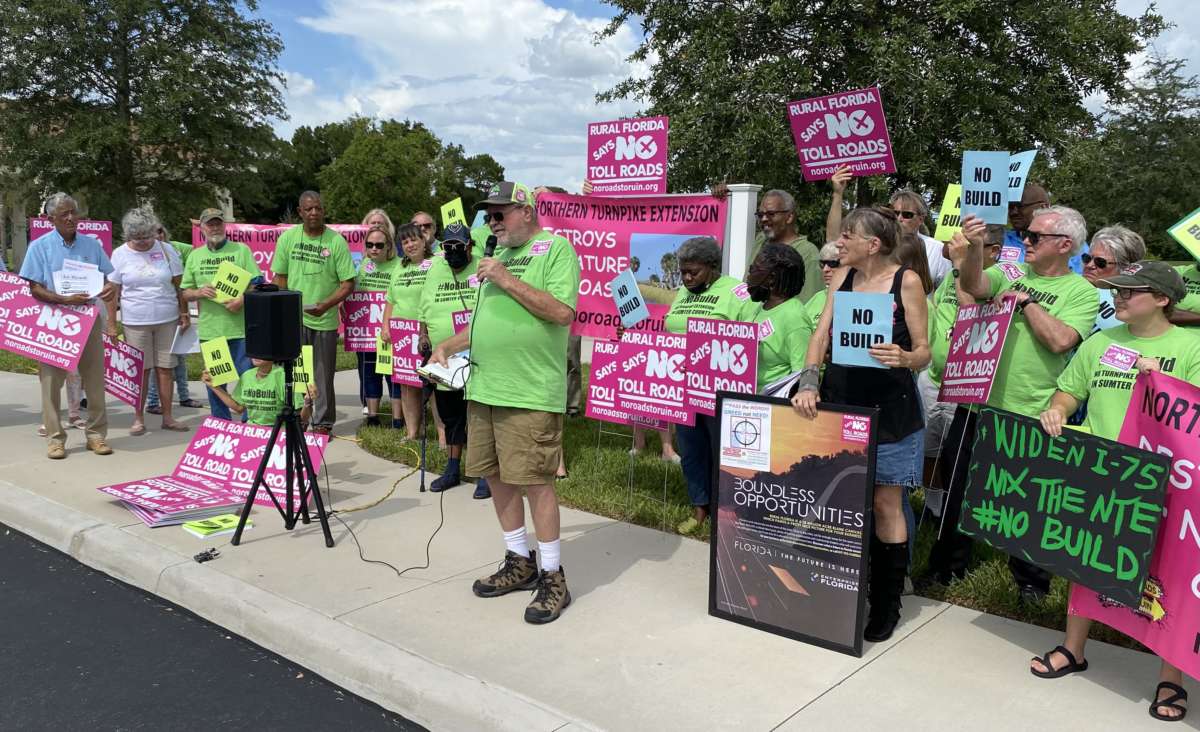 Rick Stagg spoke against the Norther Turnpike Extension at a press conference before a Sumter County Commission meeting in The Villages. Photo: Joe Byrnes, WMFE News

The Sumter County Commission heard from dozens of people Tuesday evening all urging it to pass a resolution opposing the northern extension of Florida’s Turnpike.

Residents say the Florida Department of Transportation should widen Interstate 75 instead of creating a new toll road from Wildwood to U.S. 19 with all its impacts on the environment and rural communities.

The historic Black community of Royal in Sumter County is in the proposed path. Rick Stagg, a resident of the rural community of Tillsman Hammock, said the extension would also devastate his neighborhood.

“What we want from the commissioners is to go on record and send a letter to DOT standing on the platform no build for the extension,” he said. Stagg and other opponents of the turnpike extension held a press conference outside the Everglades Recreation Center in The Villages before the meeting.

County Administrator Bradley Arnold said county staff has made it clear to FDOT that Sumter County opposes the new toll road. The county — along with the city of Wildwood — has recommeded an alternate route designed to have a less drastic impact on Royal.

Two commissioners — Doug Gilpin and Roberta Ulrich — said during the meeting that they support using the I-75 right of way.

Sierra Club representative Michael McGrath said opponents of the toll road will bring their resolution to the Marion County Commission in August.

“Local governments have been lining up, saying that we don’t want this coming through our communities, we don’t want this for our residents,” he said following the press conference. “It’s going to ruin the quality of life that makes this part of Florida so special. It’s really about protecting rural Florida.”

FDOT is expected to make a report on the status of planning for the turnpike extension by the end of this year.