Researchers Step Up Efforts To Develop A ‘Universal’ Flu Vaccine 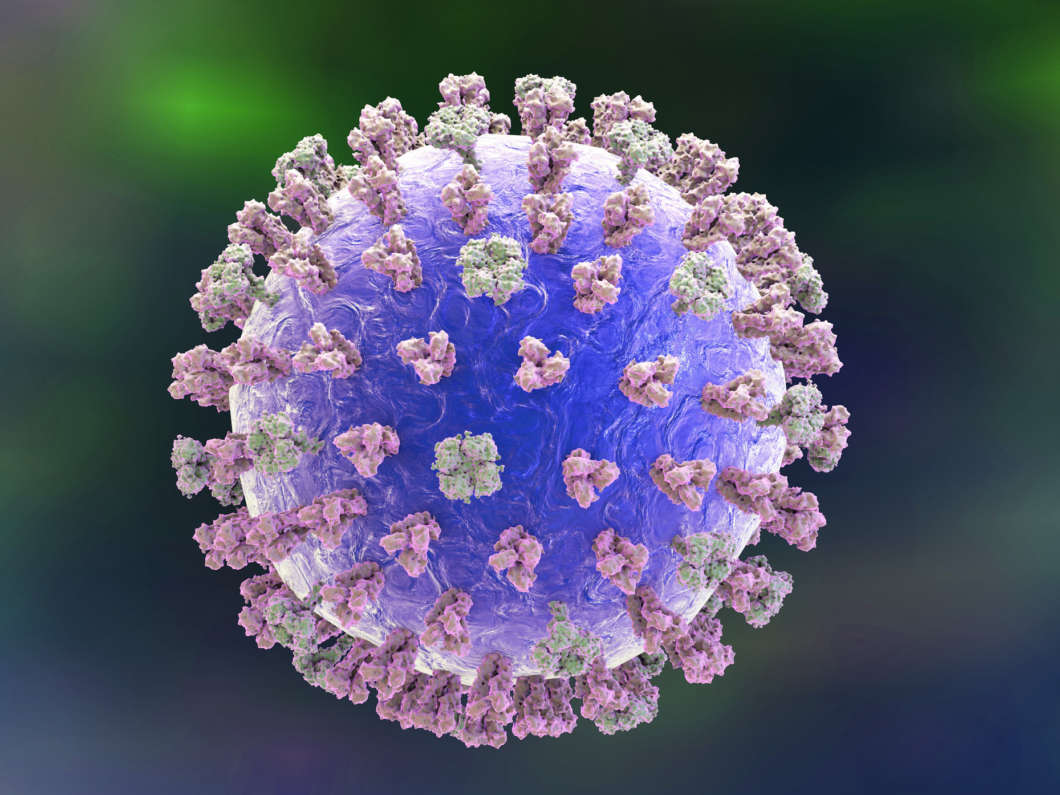 Most efforts to develop a universal flu vaccine have focused on the lollipop-shaped hemagglutinin protein (pink in this illustration of a flu virus).
Image credit: Kateryna Kon

Sarah King isn’t afraid of having the flu — in fact, she considers herself an “excellent sick person.”

“I have a pretty high pain tolerance,” King says. “I’m not a person that whines a lot. I just kind of suck it up.”

So when she heard about a medical study that pays volunteers about $3,000 to be infected with the live flu virus, King thought the offer sounded too good to pass up. Last fall, she checked-in for a 10-day stay at Saint Louis University’s “Hotel Influenza,” a quarantine unit where researchers study how the human immune system fights the flu.

Hotel Influenza is one piece of a larger effort to develop a universal flu vaccine — a single shot that would prevent multiple strains of influenza, including those that could cause future pandemics.

While the novel coronavirus dominates the headlines, flu currently causes more damage in the U.S. An estimated 29 million people in the U.S. have gotten the flu since early October and another 16,000 have died from flu-related illnesses, according to the Centers for Disease Control and Prevention.

The CDC estimates the flu shot reduces your risk of getting infected by between 40 and 60%, assuming the strains in the vaccine match the ones circulating that season.

But in the future, one vaccination could provide protection from multiple flu strains, and perhaps last longer than a single season.

A universal flu vaccine has eluded scientists for decades. Unlike other viruses, influenza has a rapid-fire mutation rate and thousands of different strains, which complicates the process. With several candidates now in development and a fresh batch of federal funding, researchers say a universal flu vaccine could be within reach, though it may be years before a vaccine is ready for human use.

The push to develop a universal flu vaccine has intensified in recent years, given unusually severe flu outbreaks and emerging pandemic strains, like the swine flu.

But it’s been a slow process, partly because researchers are testing multiple strategies as the virus continues to mutate, says Saint Louis University professor of infectious disease and internal medicine Daniel Hoft.

“It’s like running after a haystack that’s on the back of a wagon,” says Hoft, who is leading the Hotel Influenza study. “And it’s moving while you’re looking for the needle.”

There are several universal flu vaccine candidates in the pipeline, including some that have moved into the clinical testing phase.

Most research has focused on hemagglutinin, a lollipop-shaped protein that helps influenza infect host cells. The “stalk” of the protein is consistent across many different flu strains, making it an ideal target for a universal vaccine.

An international research team announced last year they had developed an experimental drug treatment that protected mice against multiple influenza strains by binding to the stalk-like protein of the virus. The tiny molecule, which is modeled on our own antibodies, is still in the early stages of development.

Other scientists are attempting to directly change the virus itself, engineering influenza with new proteins on the surface that can be used in vaccines. Known as chimeric proteins, these molecules are combinations of hemagglutinin from different strains — like swapping out the sticks of the lollipops and pairing them with new candy heads.

Researchers at Mount Sinai, who developed the approach, are trying to prompt the human immune system to produce antibodies against the protein stalk shared across many flu strains. Based on encouraging initial results in mice, the team has launched a phase 1 clinical trial of the vaccine.

Though most efforts to develop a universal flu vaccine have focused on these surface proteins, the research team at Saint Louis University’s Hotel Influenza is exploring a different approach.

“We’re looking at internal proteins inside the virus,” Hoft says, adding that these proteins are often much more consistent across different influenza strains. “We’re trying to induce a T cell response against those internal proteins.”

The human body has an army of T cells, specialized immune cells which can identify and kill virus-infected cells. T cells can recognize tiny bits of a virus, Hoft says, including proteins that are shared across many different influenza strains.

Based on some estimates, proteins enclosed in the virus are more than 90% similar across all influenza A strains. In theory, Hoft says, a vaccine could trigger the human immune system to produce T cells that recognize these common proteins and protect the body against many flu strains.

Some, known as memory T cells, are long-lived and remember previous encounters with pathogens — meaning this approach could protect a person for years.

More than one of these approaches might be effective, says University of Georgia professor of infectious diseases Ted Ross — and it’s possible vaccines could be tailored to fit different demographic groups.

“It may turn out that the best vaccines we have are designer vaccines for specific populations,” Ross says. “We could type people based upon their age or immune history or health status and say, ‘Well you need to have vaccine A and another group needs vaccine B.’ ”

The National Institute of Allergy and Infectious Diseases, a branch of the NIH, is throwing its weight behind the push for a universal flu vaccine.

The federal agency announced in February 2018 that it would begin prioritizing universal flu vaccine development. Since then, it has created a network of research centers across the country and awarded $51 million in funding in the first year of the program.

Still, Ross says it will likely be another 10 to 15 years before a product is on the market — and it may require more federal funding to get there.

And he warns, even a universal flu vaccine may not provide permanent protection.

“We would love to have a vaccine that would last for life, like we do for smallpox or mumps or rubella,” says Ross. “But in reality, flu changes so often, and it’s going to constantly keep throwing us curveballs. A vaccine that lasts for two or five years would be a great improvement.”