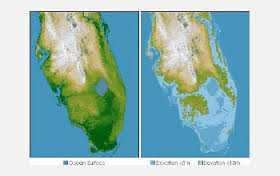 Scientists say up to three times more Americans will be affected by sea level rise by the century’s end than previously thought.

Their study, appearing Monday in the journal Nature Climate Change, is the most comprehensive yet to consider population growth in coastal areas.

The study looks at 22 coastal states and the District of Columbia. It concludes sea level rise could cause population movements like the 20th century Great Migration of southern African-Americans.

Jason Evans of Stetson University is a co-author of the study.

“When you actually do take into account the existing growth patterns that we see, the overall people at risk, it goes up by about three times from what we had thought.”

Evans says coastal areas are among the fastest-growing in the nation, but most sea level rise projections don’t account for growth because the modeling is difficult.

Up to 13 million people are projected to be at risk. Nearly half would live in Florida. South Florida alone would account for more than a quarter of the affected population.